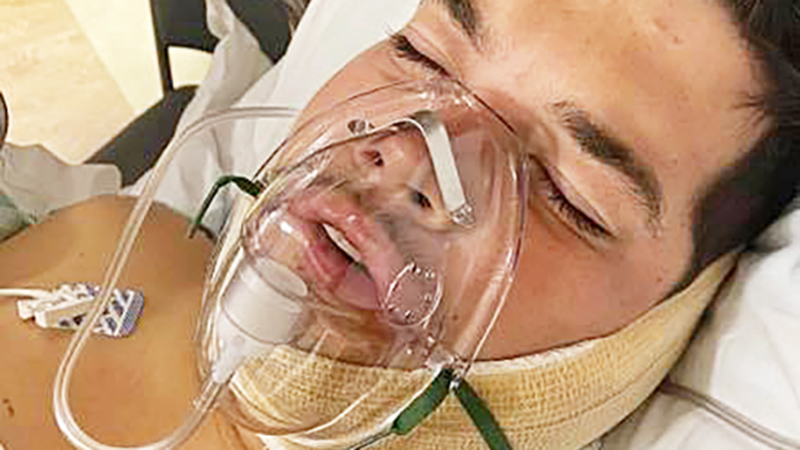 Keyton Daws is seen this week following surgery for fractures to his jaw. (Courtesy photo)

NEDERLAND — A special needs man who was punched in the face by a teenager last week is now recovering from surgery.

On Wednesday, doctors at the University of Texas Medical Branch in Galveston inserted two plates in Keyton Daws’ mouth to repair two fractures in his jaw.

Other work was performed in Daws’ mouth and the plates will be permanent, said Daws’ cousin, Kaiden Taylor.

Daws, 26, of Nederland has cerebral palsy and is developmentally delayed.

“He’s a very outgoing person who doesn’t meet a stranger,” Taylor said. “And for these kids to be like this shows what the world is coming to be. It’s scary for the new generation coming up.”

The altercation took place on the afternoon of June 30, when a 14-year-old hit Daws. A video of the incident was uploaded to Snapchat — much to his family’s dismay.

The video shows a male, who appears to be a teenager, telling Daws “I just told you not to say it again” as the punch connects with Daws’ face.

The assault occurred outside the Nederland Recreation Center located at Doornbos Park, a place where Daws enjoys hanging out, family said.

Daws’ sister Kaycie Daws told Port Arthur Newsmedia that being around youth made him feel “normal.”

Porter said extra patrols around the park and pool areas are something that is done by NPD regardless of the isolated incident. Extra patrols are typically done in the summer when school is out.

The investigation into the alleged assault is ongoing.

“We are still looking into it. It takes some time to get people in,” Porter said. “We look at video evidence and are waiting on medical records to put the case together and see if assault charges will be filed or not.”

If officers believe criminal charges are appropriate, a case will be filed with the Jefferson County District Attorney’s Office or the Nederland Municipal Court.

Possible charges range from a class C misdemeanor to a felony.

Daws was first brought to a local hospital and then taken to the Galveston hospital for treatment. He returned to UTMB this week for the surgery, which left him on a liquid and soft diet while healing. Taylor said it would take a couple of months for Daws to recuperate.

Prior to his surgery, while at home, he was able to visit with friends from the Estelle and Allan Fetters Center.

The center is a place for mentally challenged adults to come together and is located in Groves.

Daws also was visited by the family priest, who came out and prayed over him, Taylor said.

While the police investigation continues, the family is seeking legal action.

“We’re seeking an attorney and charges will be pressed,” she said.