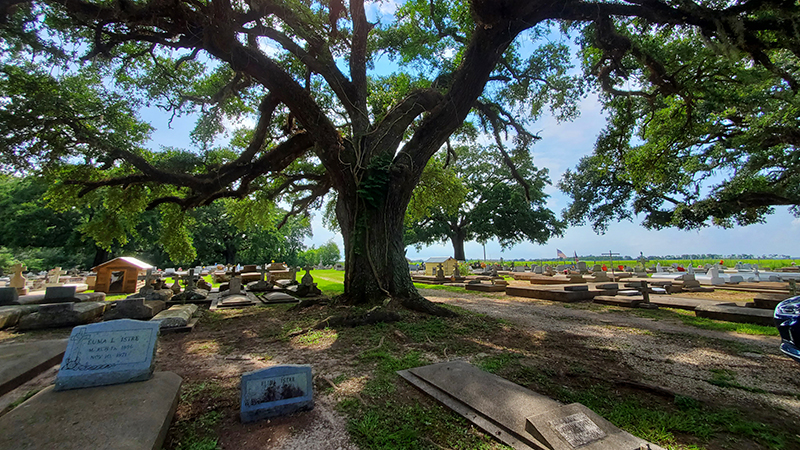 The sun peeks through an old oak tree in the Istre Cemetery in Mermentau Cove in Louisiana. You can see one of the little houses to the left in the photo. (Mary Meaux/The News)

This will sound weird, but I love cemeteries.

And the older the grave, the more interesting.

I wonder about the time period the person lived, what kind of jobs were there at that time, how did they keep their home cool in the summer and what was done to ward off the swamp mosquitoes. 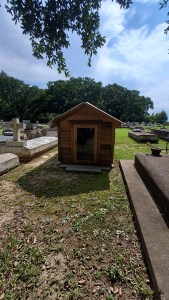 One of the little houses in the Istre Cemetery. (Mary Meaux/The News)

I had a chance recently to walk among some of my husband’s grandmother’s kinfolk – or people who are more than likely her kinfolk, due to the last name and town.

Plus, I got to see, in person, things I had only read about — the little houses of Istre Cemetery.

My sister-in-law Cindy brought me along on a no-rush trip through parts of Louisiana last weekend to places she hadn’t seen in years. We went through Pecan Island, saw a lot of nature and rice fields and crawfish farms.

I was excited to reach Morse, Louisiana, according to Google maps, and Mermentau Cove, where the cemetery is located.

I had heard of the little houses thanks to a Facebook group called Southwest Louisiana Archaeology; I just didn’t snap that they are located in Istre Cemetery. 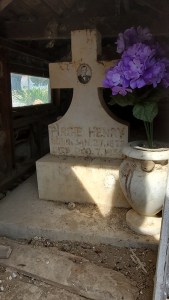 Anyways, we arrived and I got my creaky body out of the car and began taking pictures of interesting headstones, taking care to find the ones with the family name.

Then, lo and behold, I saw several of the little houses.

The grave houses are about the size of a large doghouse with a front door with a latch and windows.

The first one I came upon looked fairly new, so I suppose it had been rebuilt. I went to another one, much older, and saw the door was ajar. A rut in the dirt kept it from opening fully, but I stuck my cell phone inside and snapped a pic.

Inside were two cement graves. One had a large cement cross on it. I didn’t see any names, but it’s possible I overlooked it.

Inside one of the houses was a grave marker with the name Pirrie Henry. There was an oval photo of a man, his birth and death dates and a vase with purple artificial flowers.

I wished I had thought to bring a crayon and paper to get a rubbing on some of the very old looking graves scattered about the cemetery. One even had a picket fence around it with no visible tombstone inside. On the fence was a piece of wood with what looked like words scratched on it. 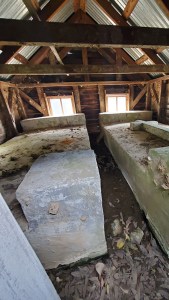 A view inside one of the little houses. (Mary Meaux/The News)

The Facbeook group I was talking about earlier has an article by Donna Price of the American Press that sheds light on the cemetery.

Istre Cemetery was founded in 1886 and at one time had 40 of the little grave houses.

“Acadians in Louisiana began constructing them over graves of their dead shortly before the Civil War. The structures began disappearing in the 1930s. Because they were made of wood and because most family members who painted and maintained them have died, the houses have succumbed to age and weather,” Price said in the article.

There are theories as to why they were built; from keeping the cattle poop off the graves to being a place to light a candle and it not be blown out by the wind to mimicking a mausoleum.

I find them fascinating and plan to delve into the lore and history to learn more.

While I don’t think any of the little houses were covering Istre graves, I did find some people with this last name and took photos of the graves.

Now it’s time to do some digging, well, genealogically speaking.