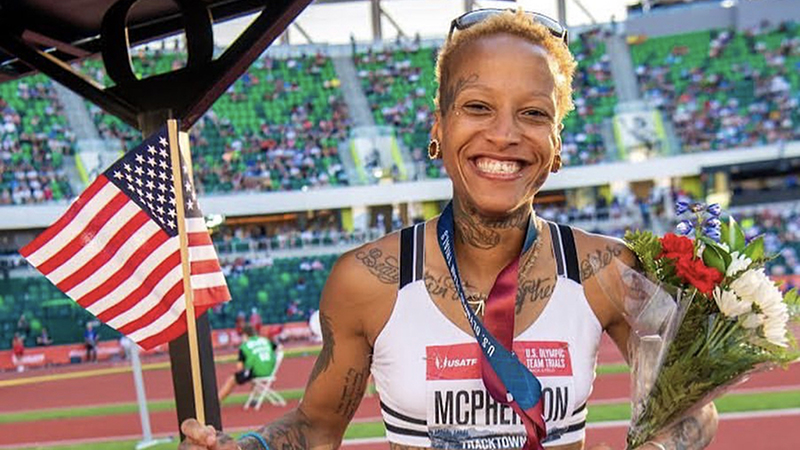 Inika McPherson placed second in the high jump at the Olympic qualifier in Oregon in June. (Courtesy Photo)

Following her second-place finish at the Olympic qualifier, Port Arthur native Inika McPherson was certain she had punched her ticket to Tokyo.

The USA team elected to go with Tynita Butts over McPherson, leaving the high jumper searching for answers.

“I was in Atlanta, talking about how I made the games, actually, and I got a phone call from Aretha Thurmond (managing director for international and championship teams),” McPherson said. “She told me that I was not going to be on the team. I asked her why and they told me (Butts) got 14th and we are going by the world rankings system.”

On Wednesday, the World Ranking System had Butts ranked 21st and McPherson at 27th.

“You go from the top-3 (at the qualifier) and then you go to fourth to see if they have the standard or if they don’t have the standard, the next best thing is the World Rankings list,” McPherson said of her interpretation of the rules. “

The Port Arthur native said the technicalities undermine the process of having a qualifier.

McPherson, 34, now wonders if her days on the Olympic team are behind her.

“There is a lot of opportunity here,” she said. “I cried my eyes out. I feel like someone ripped my heart out of my chest or that I lost someone very close to me. I put so much into this sport. There is no money in this for high jumpers. If you go sprint, you can make close to a million. If I go jump and have the best jump in the world, I am still going to make like $25,000. This isn’t about money. I do this because I love it and I give my heart to it.

“There are a couple of track meets after the Olympics and we have the 2022 World Games next year. People are saying to just go to the 2024. That is easy to say when you are in your 20s. I want to start a family. That was my plan to put my name out there even more and maybe get some sponsor deal and come back and start a family.”

While McPherson is fueled by her passion, she said there is a considerable financial toll as well.

“I moved to a city I never even visited to train with a coach that I thought was the best,” she said. “I moved here with nothing in my pockets, working on unemployment. I had help from my mother, friends and supporters. It wasn’t only me that put time and money into this. I don’t go shopping. I don’t remember the last time I bought a pair of shoes. I don’t even remember the last time I bought clothes because I just wear athletic gear. I train 24/7.”

McPherson said she is still training and competing for as long as her body allows her.

“I am still a vessel of God and I am here, not only to high jump, but to serve God,” she said. “Some people asked me to not say anything but I can’t do that. I put too much time into it. I feel great. I am in great shape right now. At the beginning of the year, I had knee issues. After going through all of it to have it ripped away is disheartening.”

McPherson is a 2005 Memorial High School graduate and was also named her school’s Athlete of the Year at the University of California in 2009. She went on to represent the U.S. at the 2016 Rio Olympics.