State legislators coming to speak to YOU. Luncheon planned Aug. 25 in Port Arthur 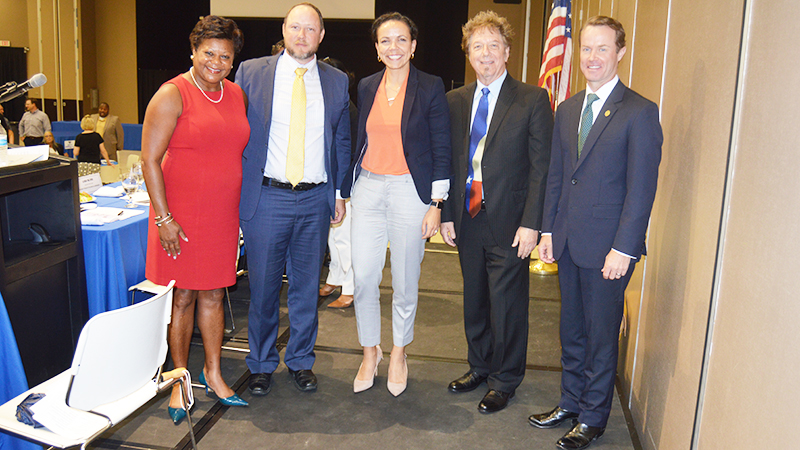 The Port Arthur Chamber of Commerce will host a community luncheon to talk about the Texas legislative session and it’s impact on Jefferson County and the surrounding area.

The 87th regular session wrapped up in May.

“We have accomplished a lot already,” Pat Avery, Port Arthur Chamber president and CEO, said. “We want to update everyone on what is going on in, not just South County, but North County and Orange.”

The luncheon is set for Aug. 25 at the Bob Bowers Civic Center.

Avery encouraged people to go online at the Port Arthur, Beaumont or Orange Chamber websites to view the legislative agenda for the area.

“Before the 87th Legislative Session started, we made a video as to why those issues are important to us,” she said. “Our legislators had a great session, but I would like to point out Joe Deshotel had some major bills signed into law by the governor.”

Deshotel, who represents House District 22, will not be able to attend the event, Avery said.

“We’ll probably have him in September to talk about the legislative session,” she said. “The governor signed House Bill 2730 on imminent domain. That was Representative Deshotel’s bill. He also signed House Bill 17, which was also one of Deshotel’s bills that had to do with making it illegal to have natural gas be a part of new commercial construction. That is very important to our area. He had a great session.”

Avery said the luncheon would give locals a chance to celebrate Texas Speaker of the House Dade Phelan.

“He is from our area,” she said. “Our legislators work very well together. Senator Brandon Creighton will be with us as well. He will also tell us what he has been doing.”

A special session is set to take place this week with no definitive end date set. Avery said she believes the session will wrap up by the date of the luncheon.

“The last time the governor called a special session, they were done around the second week of August,” she said. “We are hoping that will be the case. Speaker Phelan was at our last luncheon and gave us a quick synopses, which was no more than 10 minutes. He encouraged everyone to come back (Aug. 25) to hear him speak.”

June’s luncheon had more than 300 people. Avery said she hopes the success of the previous one keeps momentum rolling for the event next month.

“I was very pleased with the attendance,” she said. “We have our industry show in September and it is already sold out for the most part. It will be huge.”

Chamber Chairman Ron Arceneaux said he is happy to be sharing the experience with the Mid County chambers. He said the last luncheon with all of the chambers exceeded 600 people.

“I am happy we are getting to come together as we have in the past to get our memberships together,” he said. “I am excited to be able to share information and questions and hear updates from our legislature.”

Arceneaux said Phelan works for all of Texas but his potential impact on the local area is historic.

“He has certainly worked tirelessly for the benefit of Southeast Texas and we are proud of that,” he said. “He is doing an extraordinary job keeping order with the wild Texas House of Representatives. Deshotel is also having an extraordinary session. He really is.”

Those looking for more information on the luncheon can visit portarthurtexas.com or call the chamber at 409-963-1107. Registration deadline is Aug. 20.