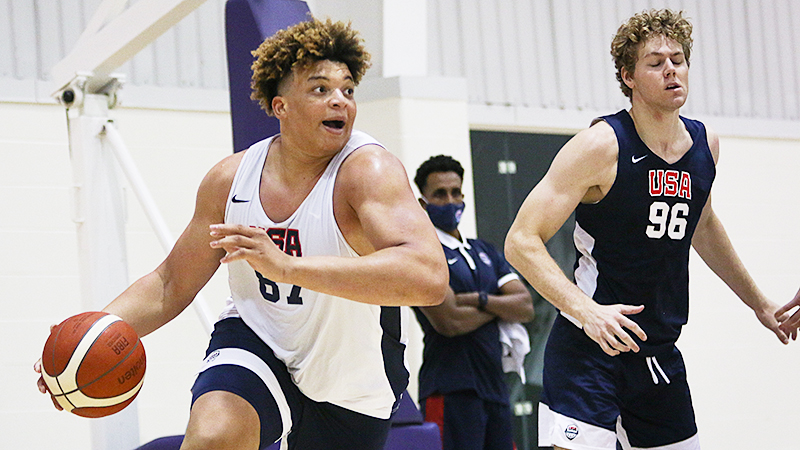 Team USA U19 team earns the top seed in Group D heading into the round of 16. (Courtesy of USA Basketball)

The USA U19 team secured the top seed in Group D in the knockout phase after beating Australia 87-66 Tuesday in the final game of the preliminary round in Riga, Lativa.

The Louisiana Tech sophomore has shot 60 percent from the field through the first three games.

“We want to continue to get better as a team and compete to try to win the gold medal,” said Lofton Jr. after Sunday’s win. “I am just trying to contribute, score some points inside, defend, grab rebounds and do whatever I can to help the team win.”

In Tuesday’s matchup, USA jumped out on an early 9-0 run. Australia was able to fight its way back to bring the score to 44-42 at the half, but the Americans were too much and pulled away.

“I think we just found our groove defensively, we started to get out front, started to get stops and doing what USA teams traditionally do,” said Patrick Baldwin Jr., from Hamilton High School, following USA’s win Sunday. “So, once we started getting stops and getting out and running, it opened up the game for us.”

Reigning FIBA U19 World Cup gold medalist, USA men’s teams have won seven gold medals, three silver medals and one bronze medal while compiling an 100-14 overall record in U19 World Cup play since the event was launched in 1979. Even more impressive, the USA has won four of the past six U19 golds since 2009.

The elimination round of the tournament starts Wednesday, with USA and South Korea to play at 12:30 p.m.

To watch the games, visit the FIBA YouTube page.