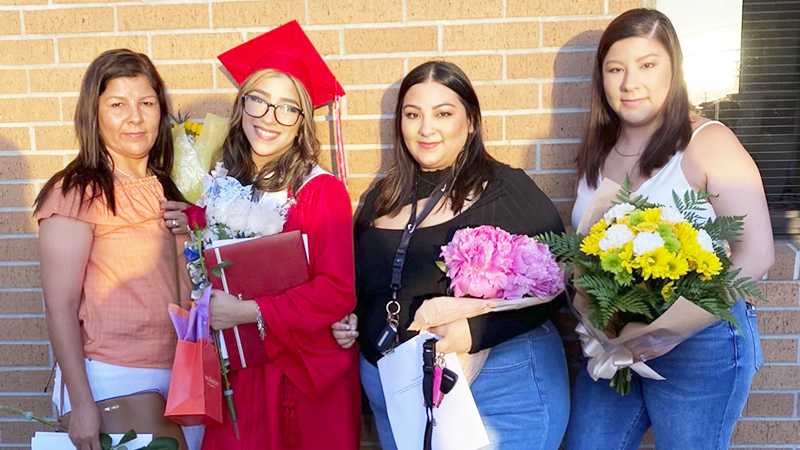 But looking at the way her past has shaped her future, that might just be an understatement.

Sanchez, 18, was one of the top three graduates in her senior class. With a 4.3 grade point average, it’s not hard to understand how she got into Stanford University. But to do it on a full ride while working evenings and weekends through high school — well, that’s quite the accomplishment.

“I applied through a program called QuestBridge National College Match,” Sanchez said. “You qualify to become a finalist, and then rank your preferred schools. It’s binding in that you attend the highest-ranking school to give you a full ride.”

For Sanchez, that happened to be Stanford. The California university with a 4 percent acceptance rate will be providing the approximate $300,000 Sanchez needs for tuition, housing, books, etc.

“I’m really lucky that I got the full ride,” she said.

Currently she works as an intern at Bob Hope School. But she’s been employed since the age of 16, working at Texas Roadhouse and H-E-B.

And she’ll continue working until the sociology major leaves in September to quite literally change the world.

“Every since I was little in a Mexican household — our parents were raised in a completely different culture,” she explained. “It was very sexist to me. I was 9 when I realized what feminism was and gravitated towards it. I began to learn more about human rights and basic civil rights. I really want to change the world.”

Sanchez is the youngest of three and will be the last child to leave the nest. And while she doesn’t think it has “hit” her mom that she’ll be leaving soon, she’s proud of her daughter’s success.

“I was at work (when finding out about the scholarship) and I came home crying,” Sanchez recalled. “She automatically assumed I didn’t get it. I surprised her by telling her I did, and she teared up immediately.”

She’s most nervous about fitting in at her new school but also excited about her new surroundings.

“I’m really excited to see something new,” she said. “I know I’m going to get home sick but I’ve only ever known Port Arthur. Going to California — I really want to explore it.”