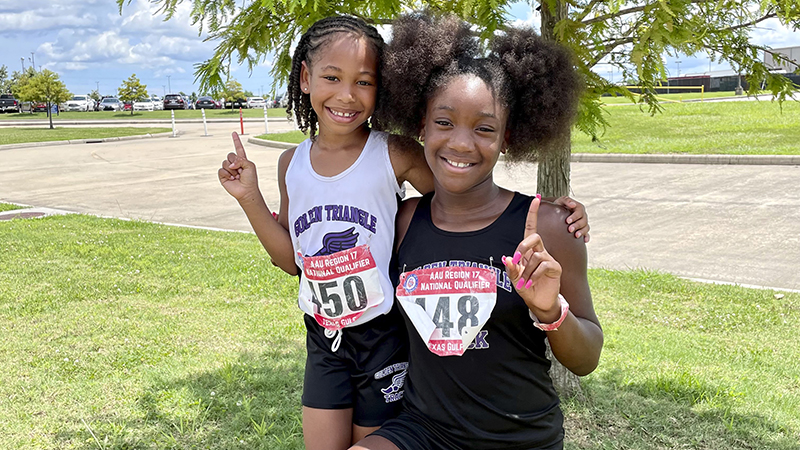 Two Port Arthur girls are heading for Houston after qualifying for the Junior Olympics this week.

Khole Joubert, 7, and De’Mijah Gorrer, 10, put up impressive numbers to move on to the regional round.

Joubert qualified for the long jump, with a personal best of 9’2.25.” The jump beat her previous record by 2 feet.

“With them qualifying, they will be going to the AAU Junior Olympics,” DeVante Conner, the girls’ coach, said. “Each week, they have been progressing. This is Joubert’s first year really running track. Each week, they are all getting faster and faster. It has been rewarding watching them. By the time they get to high school, they will be top athletes in the state already.”

Joubert’s mother Ashley Joubert has been her biggest fan.

“Me and my husband are super proud of her,” she said. “She is top-10 in the greater Houston area. She is one of the youngest. Even though she runs the 8 and under, all of the girls that beat her are 8 years old already. She is super fast. It is fun to watch her. She has really grown, and we can’t wait to see what she does next year.”

Sometimes, Khloe doesn’t get quiet enough running for her liking and will call up Memorial track coach Darrell Granger to open up the track to get some more work in, her mom said.

Gorrer’s mother, Aisha Joseph, said they were not her daughter’s top times, but added she was happy she qualified.

“It comes natural to her,” Joseph said. “She picks and chooses when she gives her all. She has an older sister (13) that runs track and she beats her almost every time.”

Gorrer said she is excited to be competing in Houston and added her favorite race is the 100-meter dash because it is the shortest.

The girls will compete in Houston Aug. 1-7.