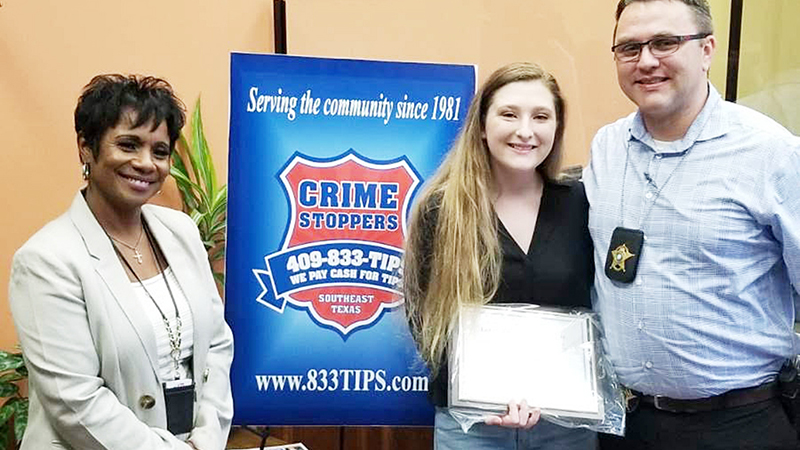 She’ll receive some scholarship help courtesy of the Crime Stoppers of Southeast Texas Larry Beaulieu Scholarship, which she was awarded Tuesday.

The scholarship was created to support the education and development of the children of area law enforcement and to honor Beaulieu, who is the agency’s founding chairman.

Jones is set to attend Lamar University, where she will major in music. After that she plans to attend Texas A&M to major in engineering then head to the U.S. Air Force.

When she learned she was being awarded the scholarship, Jones said she was shocked but happy because it will help her buy textbooks.

Music has been a passion even back to fourth grade, she said, when students received recorders to play. She went on to join the middle school band and continued through high school.

“Everyone says I have a natural talent for music,” Jones said, adding she enjoys the challenge of new music she hasn’t played before.

She can play the instruments in the clarinet family, saxophone, piano and guitar. Jones aid she is self-taught on all but the clarinets.

As for the Air Force, Jones said she has a lot of family members who are in law enforcement, security guards or the military.

“I always knew since I was little that I wanted to go into the armed forces,” she said. “I chose Air Force because they have better benefits and I love planes and anything aeronautical.”

After the military she will rely on a career I engineering.

Her dad, Chad Williamson, is a detective with the Jefferson County Sheriff’s Office. He said the family is excited for Jones.

“She worked really hard to accomplish this,” Williamson said. “She’ll be the first of her siblings to go to college, and we’re hoping she paves the way for the rest of them.”

The scholarship ceremony was led by Stephanie Vanskike, the executive director for Crime Stoppers of Southeast Texas.

“This scholarship was created in 2012 to honor the visionary leadership of Mr. Larry Beaulieu, who was instrumental in bringing a local Crime Stoppers agency to Beaumont in 1981,” Vanskike said. “Mr. Beaulieu knew that Crime Stoppers could make a positive impact in our community and gathered the stakeholders necessary to bring the agency to fruition. He was the founding chairman of Crime Stoppers and remained an active board member for over a decade.”

Vanskike said the organization believes this type of initiative and leadership exemplified what they hope for in future generations.

The scholarship is given annually and is open to seniors graduating from high school who are children of a local law enforcement officer whose agency is an affiliate of Crime Stoppers.

Scholarship recipients must have at least a cumulative 3.0 grade point average and experience that demonstrates leadership and commitment to community service.

Michael Lindsay with Lindsay, Lindsay, and Parsons Law Firm and Mike Fuljenz with Universal Coin & Bullion are the scholarship patrons.