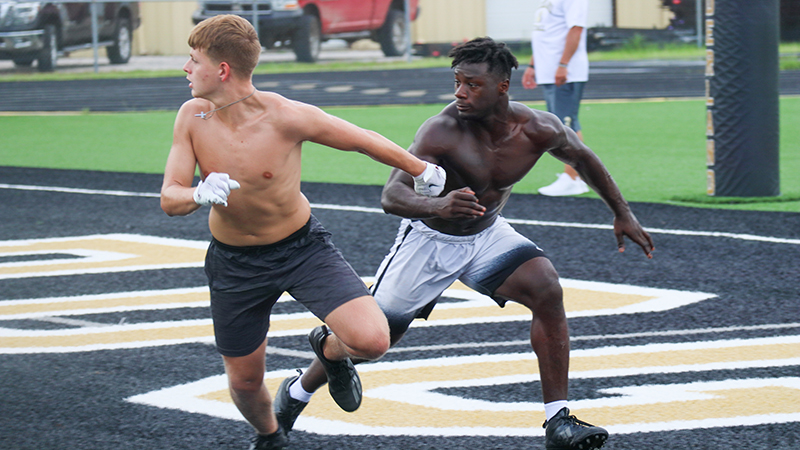 That leadership and experience led the Bulldogs to the third round of the playoffs for the first time since 2012.

A total of 37 of the team’s 57 players last year were seniors. This year, the Bulldogs return 15 seniors.

With a much younger team taking the field in black and gold, the team will heavily lean on the experience seniors like cornerback Steven Bourgeios.

“I’m a returning veteran and some of the younger guys look up me,” Bourgeios said of his role on the team.

The corner is not naturally a vocal person, but is trying to be more outspoken as his role expands.

“With this being my last year, we are trying to prepare the younger guys to be leaders,” he said. “I’m going to have to speak more, because we have a few freshmen practicing with us. I come out here and we push each other to be better.”

Nederland Defensive Coordinator Chris Theriot said Bourgeios has grown a lot since his freshman season and learned a lot from last year’s seniors.

“Leading is not always barking at someone,” Theriot said.” It can be how you show up to practice on time, how you communicate with others and how you treat others. He has accepted that role and done a good job with that.”

“Steven brings an unbelievable athletic ability,” Theriot said. “He is very fast and explosive. Man, he competes every down. There are no off plays for him. He gets after it and does not want to let his teammates down. He gives 100 percent with everything he does.”

Fellow senior Kyndon Fuselier plays in the secondary with Bourgeios. The two hope to form a dominant unit.

“We have been talking about our senior year since our freshman year,” Fuselier said. “We have been working for this moment. This is going to be our year, I feel like. He has become a vocal leader in the secondary. I feel like we can get them right.”

“I also have a cousin that plays receiver and even though I don’t play offense, he inspires me,” Bourgeios said. “He pushes me to go harder, too.”

Bourgeios is never too far from competition. When he is not playing football, one can find the senior on the track.

“I do summer track and select track,” he said. “I stay busy doing sports to keep me entertained, because I am an active person.”