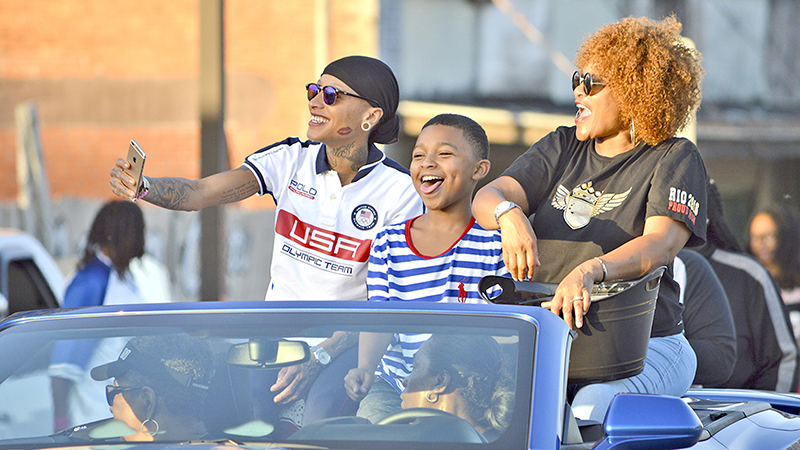 Two with ties to Port Arthur and Mid County will represent the United States in the Olympics next month.

Inika McPherson, Port Arthur track and field star, qualified in the long jump and Maggie Malone, whose dad was the head football coach for Port Neches-Groves from 1989-1990, made the team as a javelin thrower.

McPherson and Malone also made the U.S. team in 2016 and competed in Rio de Janeiro, Brazil.

As a high school freshman, McPherson became a state champion in the high jump with a jump of 6 feet, which is tied for the freshman record.

In #PAProud tradition, McPherson has plenty of support in her hometown. From those she grew up with to those simply happy to see their city represented on the world stage, McPherson has the attention of Port Arthur.

In 2016, the Port Arthur Newsmedia named McPherson’s Olympic journey the top sports story of the year.

She graduated in 2005 from Memorial along with Texas Longhorns star and former NFL running back Jamaal Charles.

At only 5’4”, the Olympian has not out jumped her classmates’ expectations. Constable Chris Bates and PAISD School Board Member Brandon Bartie said they knew McPherson was destined for greatness.

Malone never lived in Port Neches Groves ISD, but the ties are strong. Her father, Danny Malone, was the head football coach for the Indians in 1989-90. He led PNG to the state quarterfinals in his first season and resigned in January of 1991.

While she never lived in the area, nothing binds one to Southeast Texas like having a family member be the head football coach, especially a successful one.

Malone ran track at the University of Nebraska before transferring to Texas A&M.

In 2016, she became the first female javelin thrower to win an NCAA title and U.S. Olympic Team Trials title in the same season.

According to her Olympic profile, she broke her femur and chipped her growth plate when she was in kindergarten and the doctors thought her leg would never grow again.

This area has produced some amazing athletes. Players from every sport have made it to the highest of highs in their respective professions, but there is nothing quite like being able to put on the red, white and blue for the United States and compete against the best athletes in the world.

These two have reached that, not once, but twice and deserve our full attention. Come early next month, the world will watch Olympians compete at the highest level, but only two athletes will have all of Southeast Texas behind them as homegrown fans.