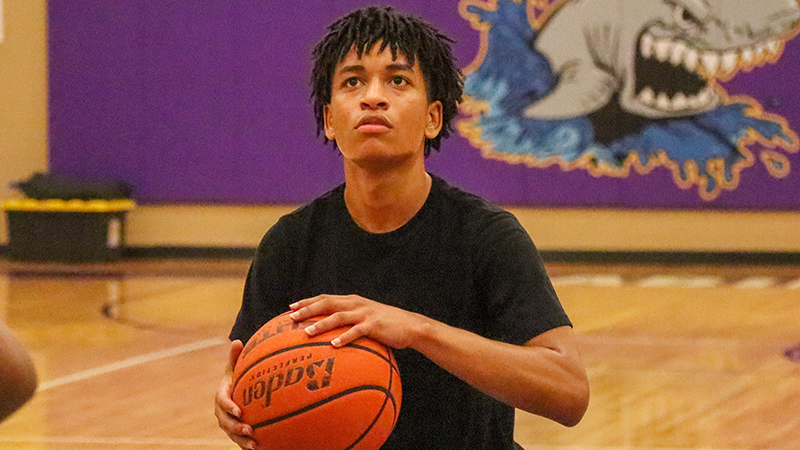 With first-day numbers low, Jason Thibodeaux, Sabine Pass football coach and athletic director, was focused on getting the word out.

After weight lifting, Thibodeaux called a parent, who used to work at the school to inquire if her sons were going to come to the workouts.

“We have some here and that is always promising,” Thibodeaux said. “The biggest thing is getting them here. Parents work and I understand that. We don’t really know our numbers until school starts because they can’t really come to two-a-day practices either. They don’t have a way to get here and I can’t punish the kids for that. I get it.”

With the school being relatively small, the Sharks offer multiple activities during the summer workouts for the players who will likely be playing two sports.

After lifting weights, the five students went to the gym to work on volleyball and basketball drills.

“We don’t have a lot of kids that just play one sport,” Thibodeaux said. “We encourage them to play everything. In the spring, it is kind of tough, because they want to do One-Act, they want to do all of these sports and we try to juggle it all.

“With the kids that we have, we want to keep them focused and interested in doing all off the sports. If you have two kids that don’t want to do it, it can be detrimental to the program, because you only have that many to start with.”

Sophomore Richard Thomas will be on the basketball team this upcoming school year, but said he is contemplating playing football as well.

“I think it is helping everybody out,” Thomas said of the summer program. “I know it is helping other teams getting work in. We are getting work in, too. We have a younger team with all of the seniors leaving. We just have to put in the work. As long as we put work in, in the weight room, and put shots up, we will be good.”

The varsity team graduated nine players. Thomas was not eligible to play last season because he was a transfer.

“I have been working during the summer with a coach in Beaumont and training some,” Thomas said. “I still have a lot of work to do… it is going to be hard to get (some teammates) in, but we just have to get them on track and let them know we are serious if we want to make it to the playoffs and past the first and second rounds.”