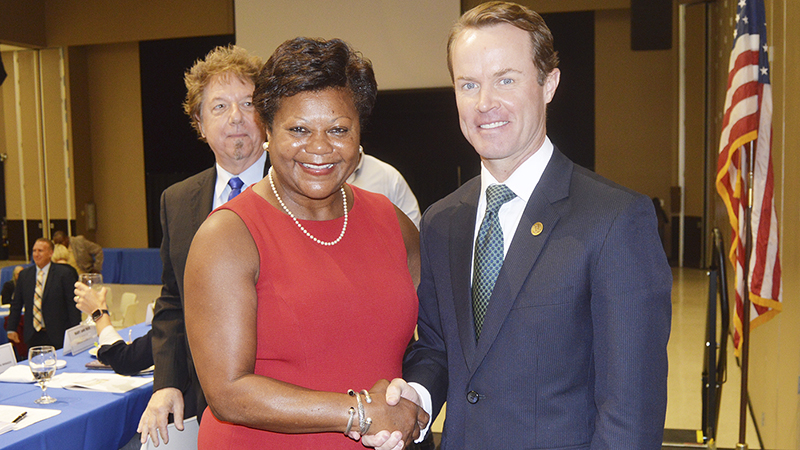 Greater Port Arthur Chamber of Commerce President/CEO Pat Avery poses for a picture with State Rep. Dade Phelan, who serves as speaker of the Texas House. In the background is Chamber Board Chairperman Ron Arceneaux. (Stephen Hemelt/The News)

The Texas Legislature is scheduled to convene next month in a special session called by Gov. Greg Abbott. Helping lead that effort will be an elected official who represents portions of Port Arthur and Mid County — Dade Phelan.

The District 21 state representative recently completed a regular session as speaker of the Texas House, a first for any local office holder.

“It is a huge honor to be the speaker of the Texas House,” Phelan said this week. “I will repeat this stat quite often because I am very proud of it: It’s the first time in 172 years that someone from Southeast Texas has had this position.”

Phelan delivered his remarks to more than 200 people at the Greater Port Arthur Chamber of Commerce Luncheon.

“Soon after I had enough votes to be speaker, I got a call from Carl Parker, who reminded me he was four votes away from being the first speaker of the House in the history of Texas to be from Southeast Texas,” Phelan joked. “It is not easy and I understand how close you can get and not get there. You ask all your fellow state reps to go and support you. It’s one on one, very interesting and a huge honor, but it is like herding feral cats.”

Phelan did get there, and with it, stepped into a position no one from this community has ever occupied.

The fourth-term representative with a district office in Orange said operating as Speaker turned him into a part-time therapist who hears all of the issues of his fellow representatives.

He described the 2021 regular session as uniquely challenging with the restrictions of COVID and the unexpected impact of Winter Storm Uri, which resulted in more than 100 deaths for the state of Texas.

Despite the challenges, he lauded the session’s results in passing a budget that was under population growth and under inflation for the fourth straight term.

“It’s phenomenal that Texas has done that,” he said. “When we did it in 2015, nobody ever thought we would do that again.”

He said the positive news would be known before the summer ends. College President Dr. Betty Reynard, who was in attendance for Phelan’s remarks, is playing it just as coy and did not return a call from Port Arthur Newsmedia seeking clarification on the region’s potentially positive news.

One thing Phelan did discuss with importance is redistricting, which he expects to occur across Texas government lines in late September or early October.

“That is something that everybody in this room should be very, very concerned about,” he said. “We will get the raw data on the census in, probably, September and immediately get to work on drawing new house lines, state senate lines, new congressional lines, new state board of education lines. Many county commissioners and those in different wards in the cities will go through redistricting, as well.

“Fortunately for the State of Texas, 1,100 people move here everyday. Unfortunately, they are not moving to Southeast Texas. We all know that. We had Harvey. We had Imelda and we had other issues in Southeast Texas that suppress our population.”

He stresses, as speaker of the House, rural Texas would not get run over by heavily populated cities throughout the process.

He promised to lead the House through a deliberate and respectful review but stressed “September, November and December are very important months for Southeast Texas as we take on redistricting.”