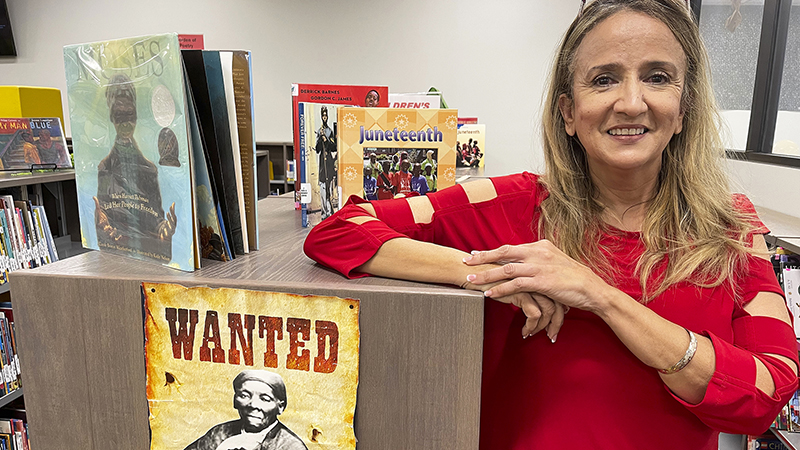 Carolyn Thibodeaux with the Port Arthur Public Library stands next to a Juneteenth display in the children’s library. (Monique Batson/The News)

Carolyn Thibodeaux shines with positivity. As the children’s librarian at the Port Arthur Public Library, one can sit back and watch as she interacts with every child, knowing almost all by name. It’s a job she’s had for 22 years.

But decades ago, when the former legal assistant decided to transition into education, she didn’t know how influential she would truly be.

She was living in Arlington with three young children when her path chose her.

“When (my kids) were little, I enjoyed watching the classroom they were in,” Thibodeaux said. “That’s what gave me the vision to go back to school. It was so motivating to watch the teachers and watch my kids develop.”

The Lake Charles, Louisiana, native grew up surrounded by children. Her mother kept kids in their home while her father worked as a contractor.

And later, when she found herself a single mom, she used that as motivation.

“I think women instinctively know we’re going to provide a good life for our kids,” she said. “We’re going to continue learning and going. So education was the fit for me.”

And while she acknowledges divorce was painful, she still found a way to flip it into a positive.

“He was an entrepreneur,” Thibodeaux recalled. “I learned so much from him. You learn from the pain, but you try to pull out the positive. Because he was a great businessman, he did influence my abilities to negotiate and put contracts together.”

Currently Thibodeaux is crafting the library’s summer reading program, in which 150 young participants are enrolled. From weekly programs to reading lists, she keeps students engaged and learning during the summer.

But next month, a recent change in law will allow her to incorporate a new curriculum that brings with it history, culture and education.

“For July 4th I hope to tie in both the American Flag and the Juneteenth Flag and do a curriculum on the flags together,” Thibodeaux said. “It gives me chills to be able to tie the two together now officially.” 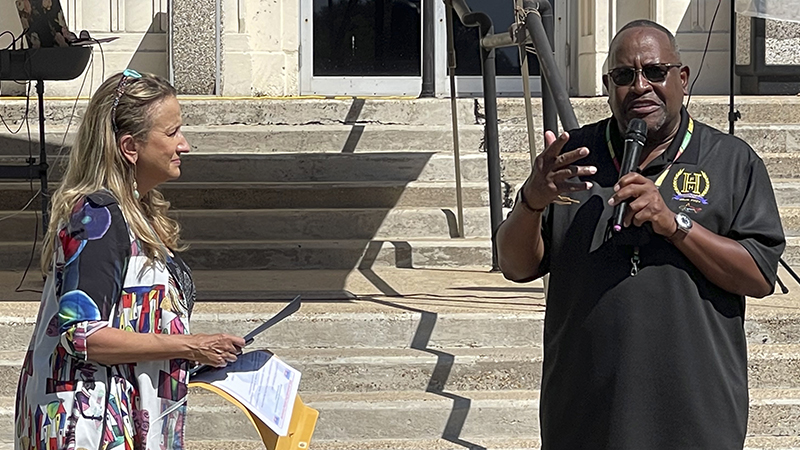 Thibodeaux is African American Creole. But the former wasn’t necessarily taught to her as a child.

“My history is important, but because I wasn’t raised being taught it, I learned it,” she said.

And a majority of that, she said, came with the help of Gail Pellum, president of the African American Cultural Society. The two became friends as Pellum did presentations during summer reading programs.

“When I met Carolyn, we had an instant connection,” Pellum said. “Carolyn is a good worker; she’s dedicated to what she’s doing. She’s been very intricate with trying to make Juneteenth a national holiday.”

But to be in a position to bring that history to the younger generation, she said, is crucial.

“You’ve got to have your history, and you’ve got to take control of your own history too,” Pellum said. “We try to create ways to replace some of that.”

For Thibodeaux, being able to bring the African American culture to local students is more than just a blessing.

“That’s the most important thing,” she said. “I think this is why I’m put here, to pass the knowledge. For me to be able to share the knowledge and to teach it in a kind way, that makes it so people can receive it.

Thibodeaux, 60, doesn’t know when she’ll retire from the library. But as she does work with various non-profits, she’s found she would ultimately like to work in a way that impacts families as a whole.

One of the ways she does that now is empowering the women around her.

“We can share a light in our young women’s lives to help direct them in a positive way — a lot of women need help,” she said.

Thibodeaux said one way women can improve their own futures is by recognizing patterns and finding the good in each rotation.

“Life is a cycle and things are going to come back around,” she said. “When you feel them coming back around, let’s look at it and say, ‘ah ha, I have accomplished something this season in my life. When you know better, you do better.”