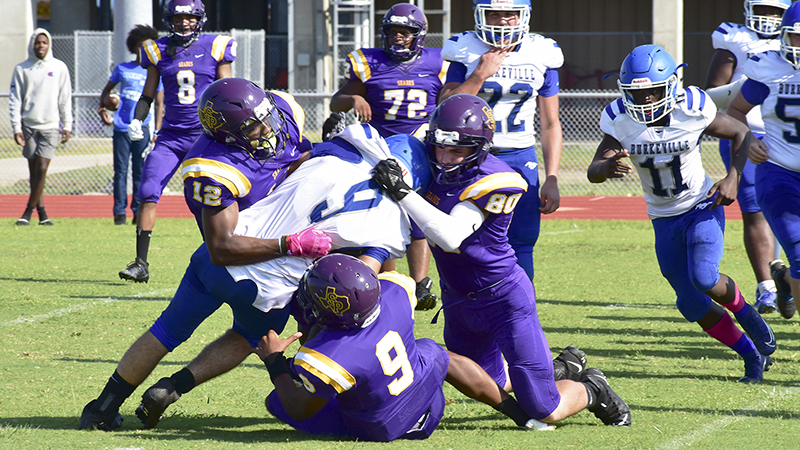 “I am looking forward to getting into the weight room, where there is air conditioning,” he said laughing. “I am hoping we get some good numbers. We always have a hard time getting kids out here because parents work. It is hard to bring them over the bridge and then come pick them up.”

For Sabine Pass, the football season teeters on whether or not the team can field a full roster.

The Sharks were not able to play a non-district schedule last season due to low turnout. Thibodeaux previously told Port Arthur Newsmedia concerns about the pandemic also limited participants early in the school year.

Last year wasn’t the first time Sabine Pass had to deal with roster issues. In 2018, the Sharks had to cancel their season after injuries took a toll on the team.

Being in a small district, each season Thibodeaux is constantly doing the math on outgoing seniors and incoming freshmen.

Sabine Pass graduated seven senior football players this past school year. That number made up nearly half of last year’s roster.

“We have eight eighth graders coming in as freshmen,” the coach said. “If they all come out, we should have a plus-1. That means we should have about 19. That is what we are looking at.”

While the weight room is the only item on the agenda for Monday, Thibodeaux said once he gets to see how many players show up, he will determine how to best use field time.

The UIL allows two hours of field training a week during this portion of the summer workouts.

“I can’t game plan until I see the numbers,” Thibodeaux said. “Then, we can come up with some workouts and see what we need to do.”

Football players aren’t the only student athletes invited to the summer workouts. The athletic director said coaches from other sports will also be present, but also deal with the same uncertainty regarding the number of potential participants.