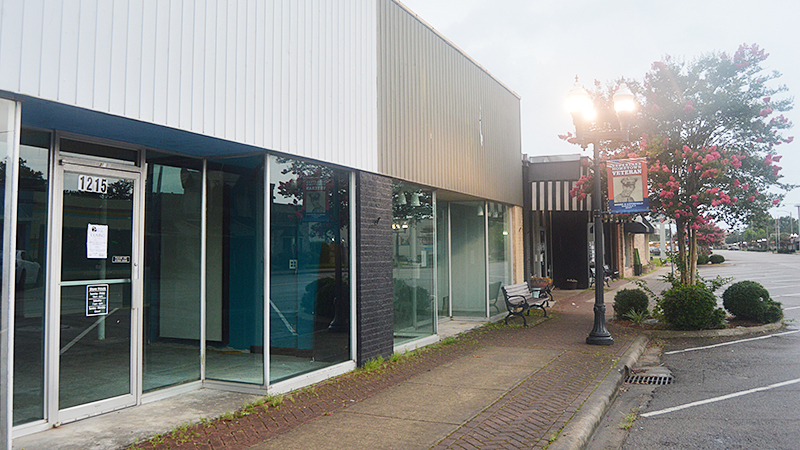 Sparkle & Co. Florist and Ortiz Formalwear are planning to move to the 1200 block of Boston Avenue in Nederland. (Stephen Hemelt/The News)

NEDERLAND — Sara Hardy likes to joke about playing with her Barbie dolls as a child and taking the imagination game to a whole other level by planning out their weddings.

The whole time she was thinking she wanted to do something similar for a living.

Now she is, having opened Sparkle & Co. Florist in early 2020 on Nederland Avenue.

The next step in her company’s growth is moving to Boston Avenue in Nederland, where she hopes to be fully operational by Oct. 1.

“There is walk-in traffic on Boston with people leisurely shopping, and I think we are going to pull a lot more people in who may have not known who we were before,” Hardy said. “They will see us while they are strolling down the street, stop in, say high and get to know us.”

Ortiz Formalwear is the other business bringing something new to Boston Avenue, with co-owner John Ortiz noting the thoroughfare has a rich tradition and great customers.

“We thought moving down to Boston Avenue would be a wonderful experience to be part of something bigger than us,” he said. “We want to contribute to the community and be part of what’s been built on Boston.”

The locations, which were owned by Roberto Maraist, had sat closed for more than two years after previously being utilized as a fish and aquarium store.

In April, the city council authorized a remodeling contract for Salenga Construction at $88,520.60 and a roofing contract for Bonnin Roofing at $28,819 to rehabilitate the locations, making them more attractive to tenants and future buyers. Councilman Talmadge Austin of Ward 1 voted against the building upgrades because he said the EDC did not appropriately vet an existing Boston Avenue business that would have been interested in expanding at the 1215 and 1217 Boston Avenue locations.

In defense, DeCuir stressed the corporation’s economic development model exists to promote job creation and tax revenue, which, she said, are being accomplished through the Boston Avenue renovations projects.

Both businesses planning to move to Boston Avenue, told Port Arthur Newsmedia the relocation would likely mean the need to hire additional employees.

John Ortiz said he and co-owner and brother Jeff Ortiz hope to be open on Boston Avenue in September, which includes expansion into more retail options.

Suit and tuxedo services will continue.

“Boston Avenue has always had traditional options for women,” Ortiz said. “For us to be able to add really nice casual and formal wear down for men and boys, it’s going to be wonderful. It will give the guys something to look at.

“We also try to be cheaper than the big box stores, so we pride ourselves on offering men high-quality casual wear and formal wear at great prices.”

“The location isn’t bigger then where we are at today, but we’re going to able to hire some good folks who need a job in the City of Nederland,” Ortiz said. “With everything we are going to do, we are going to need some more help.”

The new location represents a 50 percent jump in total square feet, which is desperately needed.

“We have gone from one single designer, myself, to three designers and we’re in the back bumping elbows all day long trying to make beautiful arrangements,” Hardy said. “This is going to give us the space we need to spread out and potentially hire another designer or two and have the room needed to create all of the things we’re making everyday.”

Hardy defines success as establishing Sparkle & Co. as a household name people think of when celebrating or honoring someone.

That comes with establishing a trustworthily brand, she said.

“The past 16 months have shown me this is exactly what I am supposed to do,” Hardy said. “This was my goal since I was a child. Against all odds we have stayed here and persevered. I have learned that flowers don’t just make me happy, they make everyone happy. In times where we could not be together seeing our friends and family, many could send flowers. It made everyone’s days better. It made us feel closer to the community to be able to do that.”