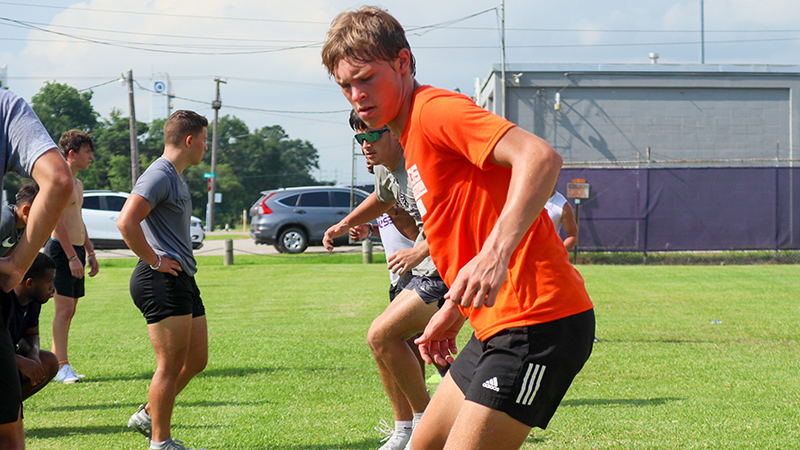 PORT NECHES — The Port Neches-Groves 7-on-7 team qualified for the state tournament. The team will compete at College Station June 24.

Former PNG running back Lance Vaughn coaches the team. He graduated this month and will head to Coe College to continue his playing career this fall. He is working out with PNG during the summer.

“It is great,” Vaughn said. “I played it my sophomore year, and we made it to state. My senior year, we didn’t get to go because of COVID. It is fun to be out there with the guys. They have a lot of intensity. It is fun seeing my teammates from last year succeed.”

Vaughn said his role is to keep the intensity and morale high.

“They have, pretty much, been coached up pretty good,” he said. “I try to keep them in the game. If they mess up, I tell them to move on to the next play. We are not the biggest guys, but we have the biggest heart. They know they can win no matter what.”

High school coaches aren’t allowed to be involved in the 7-on-7 games due to UIL rules, but they often watch and root for their players.

PNG Head Coach Brandon Faircloth said he is excited for his guys.

“We have tried to do it that way in the past and have a former player coach the team,” he said. “They know the offense and the defense. It is easier that way. Lance knows the system and what we expect. It was a lot of fun to watch him coach. It was a different role for him, but I am proud of all of the success they have had.”

PNG quarterback Cole Crippen said the games allow him to develop a rhythm with his receivers.

“It feels good to make it to state, especially as my first year as a starter,” he said. “Our team did good and our defense really did good. It helps a lot because we are going against teams that we normally wouldn’t play and going against different coverages from bigger 6A schools.”

In the fall, Faircloth will call the plays on offense, but during the 7-on-7 games, that responsibility falls on the first-year starter behind center.

“It feels pretty good (to call the plays),” Crippen said. “I know what plays work. I have a certain rotation for the first five plays of the game that usually work.”

Faircloth said the experience is invaluable for Crippen.

“Cole did a great job,” Faircloth said. “It is a little more on him… It puts him in those situations, too, where he throws an interception and has to bounce right back and put it behind him and make a good throw next time. He had to do those things and it was good to see our guys pull out some close wins right there at the end.”