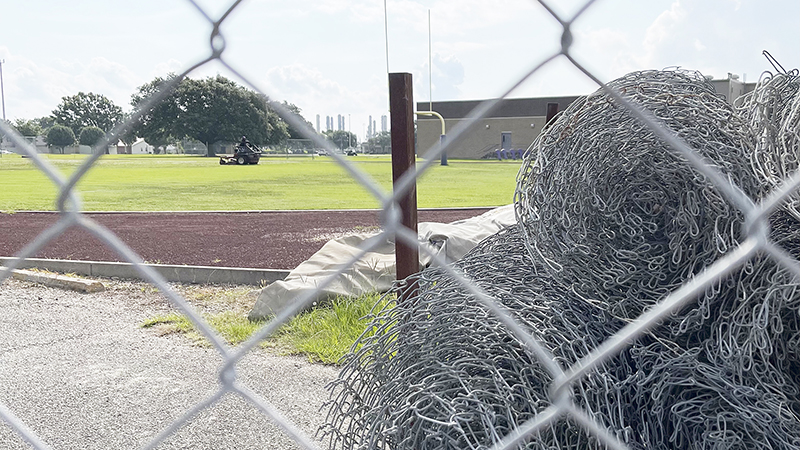 A maintenance worker mows the lawn at the Port Neches Middle School track, which is now surrounded by fencing as officials prepare to make it more user-friendly for the public. (Monique Batson/The News)

Temporary fencing has been placed around the Port Neches and Groves middle school tracks as the district prepares to make them more accommodating for public use.

In May it was announced both tracks would be replaced with the same materials used at the high school track and would include fencing and lighting for those who wish to walk after dark.

The fences currently in place are temporary to allow for construction to begin.

“They’re going to be the same type of fence we have at the high school,” said Director of Maintenance Jeff Bergeron at this week’s board meeting. “When we priced the six-foot chain link fence, the chain link fence was as much as the custom design fence. It’s kind of crazy but that’s the way the market is going right now.”

Once the new fences are in place, they’ll include a gate large enough for strollers but designed to keep destructive items, such as ATVs, off the field.

“We’ll do it like we had at the high school — I don’t know if you guys remember but you had to go in and go this way and this way — to not allow them to bring in a golf cart or things like that,” Bergeron said.

The track at the high school stadium was formerly open to the public. As part of a $10.2 million bond issue in 2007, the grass field was replaced with turf. Not long after, the new turf began to dislodge from the ground.

PNGISD filed a lawsuit against FieldTurf for the damage, and replaced it through Austin-based Hellas Construction in 2012.

Shortly thereafter, the gates were locked.

Superintendent Mike Gonzales said vandalism had also been a contributing factor, but noted the board’s decision to make two community tracks available to the public.

“If anything, this pandemic has proved to us that it’s important to stay healthy,” he said when the idea was first proposed. “Our community has needed to walk on the streets, where it’s not really safe.”

In May the board approved replacing the high school track, which suffered quite a bit of damage over the years. While getting bids, district officials also included the middle schools. For just shy of $1 million, all three will be all-weather tracks made of the same material.

Bergeron said Hellas may start working on the middle school tracks this week.

“I think that we’re looking at sometime in late August for the middle school tracks (to be complete),” he told trustees.

Timed lights operated by Entergy Texas will be added to the facilities as well.

The projects not be paid with bond money, but instead by funds acquired from Total.