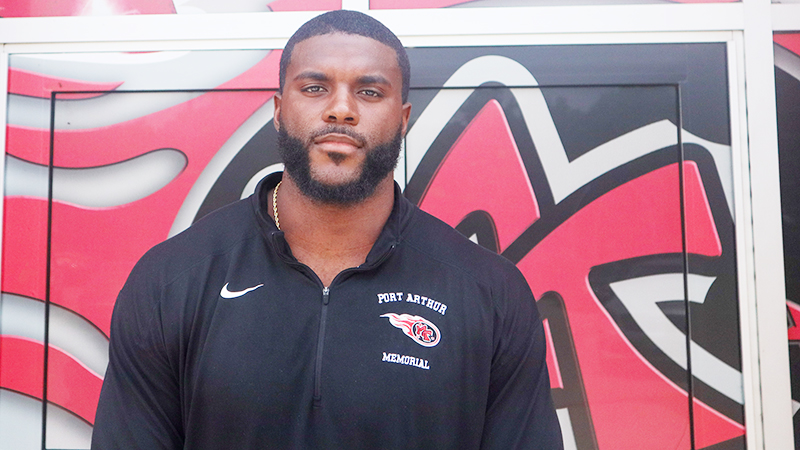 The quarterback of a football team is arguably the most important and demanding position in all of sports.

Memorial quarterback coach Ahmad Smith knows all about the position. He played for Port Neches-Groves before graduating in 2013. From there, he went on to play quarterback and receiver for Henderson State University and accepted the position on the Memorial coaching staff in 2018.

This year, Smith is leading the most experienced and decorated quarterback in the area. Last year, junior quarterback Jah’mar Sanders excelled through the air and on his feet. Sanders’ ability to make plays earned him District MVP.

Smith, who also calls offensive plays for the freshman team, enters his fourth season with Sanders lining up behind center.

“He was my first quarterback,” Smith said of Sanders. “He is now at a point to where if my eyes aren’t on the young guys, he will tell them something that I will tell them. Our offense starts with the quarterback. That is attributed to how hard he worked and grew from his sophomore year to now.”

Smith knows about playing the position at a high level. Playing quarterback for PNG is something many children dream of, but few get the opportunity.

“My first district game starting, I got player of the week,” he said. “I got four touchdowns. That was probably my most memorable moment. Of course, playing in Mid-County Madness is always fun. It doesn’t get better than that. It is awesome. It is a sold out crowd. That atmosphere is better than some colleges around here. It is different.”

Smith said he had to grow up a lot going to college seven hours away from home.

“There wasn’t any home-cooked meals,” he said, laughing. “I had to fight for a position. It was an experience. It was tough times, but I loved it.”

Smith never considered coaching until he graduated from Henderson.

After not having football, he didn’t know what he was going to do.

“My grandpa coached here,” Smith said. “He was in my ear about coaching. That first summer workout, I knew it was what I wanted to do. It was just the love of the game.”

“He really has a good perspective on football,” Morgan said. “He is a sharp guy and really works hard. I don’t have to tell him to do things. He is one of those guys that just does their job. That eliminates a lot of problems that I would have to deal with.”

“Neither of them are loud or yellers,” Morgan said. “He is not an in-your-face guy. He is just going to talk and tell them what he needs. I think they communicate really well.”

Smith said he is thankful to still be involved with the game.

“It is different being a player that is now teaching and coaching,” he said. “You can see yourself in the kids. I was at that point one time. Hopefully, we can get them to that level where they are playing in college. It is a big accomplishment when you can do for someone what someone did for you.”