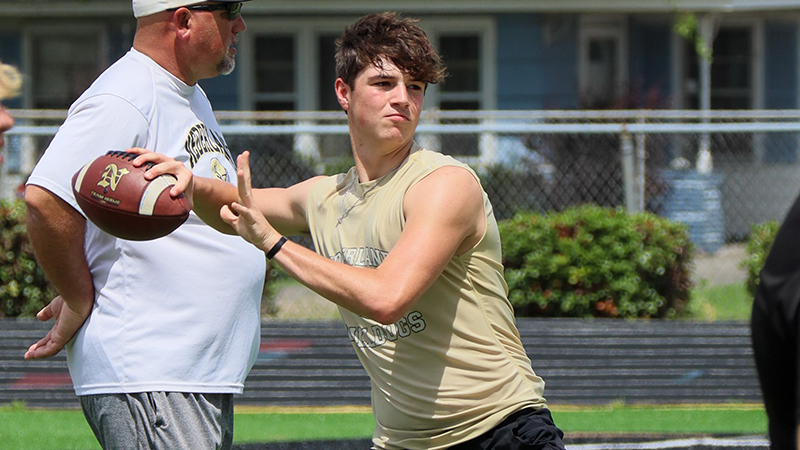 Nederland senior Luke Broussard will start at quarterback for the Bulldogs in the fall. Chris Moore/The News

NEDERLAND — For years, Luke Broussard attended every Nederland football game and imagined himself wearing the black and gold uniform on Friday nights.

Broussard will get his chance this fall as he is expected to make his varsity debut under center.

“I have been out here since I could,” he said. “My grandma had season tickets for as long as I can remember. I used to always come out here and go to every away game. I have always looked up to being a quarterback for the Nederland Bulldogs.”

Broussard said he is aware of the pressure that comes with the title.

“There is obviously going to be pressure,” he said. “Everyone is watching you. I am just going to try to go out there and preform and help my team out.”

Nederland Head Coach Monte Barrow said Broussard’s experience on the JV team has prepared him for the upcoming fall.

“Even though it has been on Thursday night, he has a lot of experience playing the position, which is huge,” Barrow said. “He is a good-sized kid. He is the kind of kid that players will follow and you need that in a quarterback.”

“He is not just going to stay in the pocket,” he said. “He can move around. He can run. He did a lot of that on Thursdays. I think he is comfortable with that role and that is a huge part of being a quarterback. He is comfortable with being more than a quarterback. He has to be a leader and a face. It is all the things that come with the position.”

Kyndon Fuselier, who led the district in receiving yards and touchdowns last season, has been impressed with Broussard.

“Luke has looked pretty good this offseason,” Fuselier said. “His ability to look off defenders and get the ball to you in a place where only you can get it is great.”

The head coach said Broussard has benefitted from the 7-on-7 games.

“They are able to develop that relationship where he can tell a guy something that is different from what he might tell another guy, because he knows his abilities and how he runs things. That is just another benefit of 7-on-7.”

During Monday’s practice, Broussard was working with the receivers and giving them feedback on hand placement and how to run certain routes.

“I feel like I have always been a natural leader, but now that I am up at the role. It has come out a little more,” he said.

When he is not playing football, Broussard enjoys spending time outdoors fishing and hunting. He said he has killed a 10-point buck and caught a 10-pound bass. After the fall, Broussard hopes he and his teammates have some trophies that aren’t from hunting and fishing.