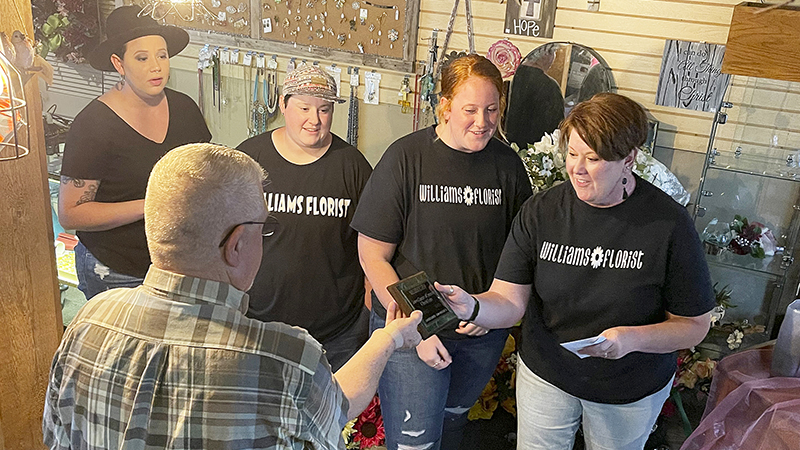 Every Valentine’s Day, Chris Legnon goes to Williams Florist and Gifts and gets a single red rose for his wife of 55 years.

On Mother’s Day, he returns for a bouquet made of flowers that represents family birthstones.

So it was no surprise when his wife, Betty, nominated Williams Florist as the 2021 Groves Small Business of the Year.

“It was just an honor to be nominated,” Alli Meaux said as she accepted a plaque and gift certificate this week from Ronnie Boneau, executive manager of the Chamber.

Boneau and other Chamber directors gathered outside the business shortly before 1 p.m. Thursday to surprise owners Alan and Prisci Davenport.

However, they were unable to be there, so daughter Alli accepted on their behalf. 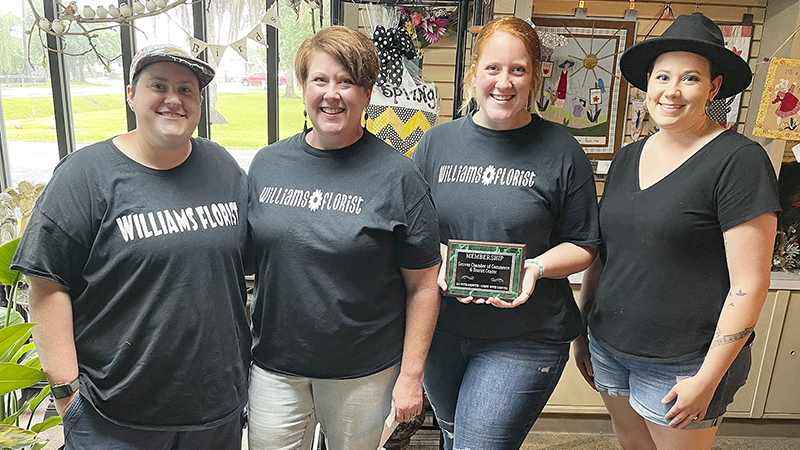 Owned and operated by family, the Davenports purchased the Main Street business 18 years ago.

“The shop’s actually been here since the ’40s, and they’re the third owners,” Alli said.

Prior to owning the store, Alan worked as a children’s pastor for 28 years, where he did floral decorations for Christmas and weddings.

So entering into the business full-time was a natural move.

“We have a lot of base customers that we help all the time,” Alli said. “Sometimes we get funerals and they’ll say, ‘You did my mother’s wedding flowers back in the 40s/50s.’ It’s a neat thing to be part of a community that goes so far back.”

Ronne credited the business for more than just flowers.

The facility is dealing with recent storm damage, and was hit hard by Hurricane Harvey.

“There were buckets everywhere,” Alli said. “It was nuts. But we powered through.”

It was something Betty recognized them for in her nomination, saying the business opens up as soon as electricity is restored. In addition, she said they donate when possible; support students, schools and churches; participate in Chamber events; and brought many smiles to people during the pandemic.

Williams Florist, located at 5890 32nd Street, will be formerly recognized at a later date during the annual chamber banquet.