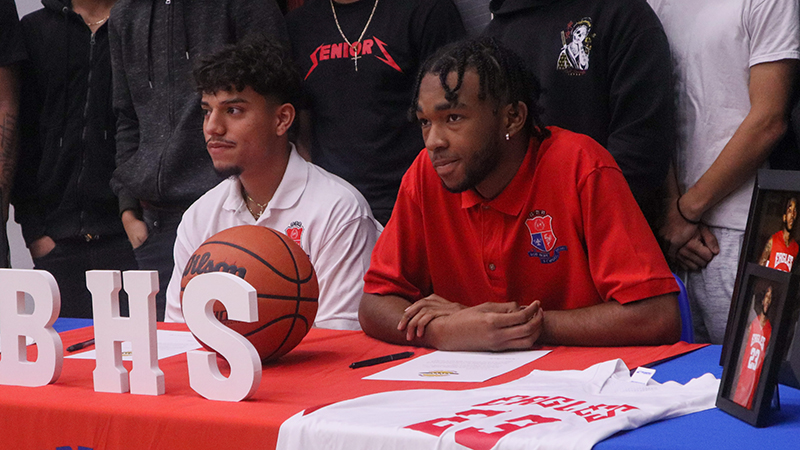 Two members of the Bob Hope School basketball team will continue their playing days together after signing letters of intent to play at the same college next season.

“It is, honestly, just a blessing,” Edwards said. “I am the first one in my family to do something like this, leave my hometown and do something that I want to do. I just thank God for it.”

Ortiz said he is also the first of his family to go to college.

“I get to do something that no one in my family has seen before and continue to play college ball,” he said. “I am grateful to have people around me to get me to this point. I couldn’t have done it without them.”

The two graduating seniors only played one year together, but said the chemistry was undeniable.

“We instantly clicked,” Edwards said. “We both knew what to do with each other. Us going to the same college is going to be the same thing. We are going to know what to do.”

Ortiz, who played point guard, said he was always able to find Edwards on the floor.

“Going into college, I am not going to have anything to worry about because I know that I already have someone that is going to have my back,” he said. “Not everyone clicks like that. For most, it takes like two or three years. For us to get it in one year is amazing.”

Edwards wants to major in kinesiology, while Ortiz wants to study Business Administration.

Ortiz was named the Bob Hope School Male Athlete of the Year.

“We our very proud of them,” Bob Hop School Campus Director Jesús Acosta said. “We think they will represent the school well. We look forward to seeing what they can do.”