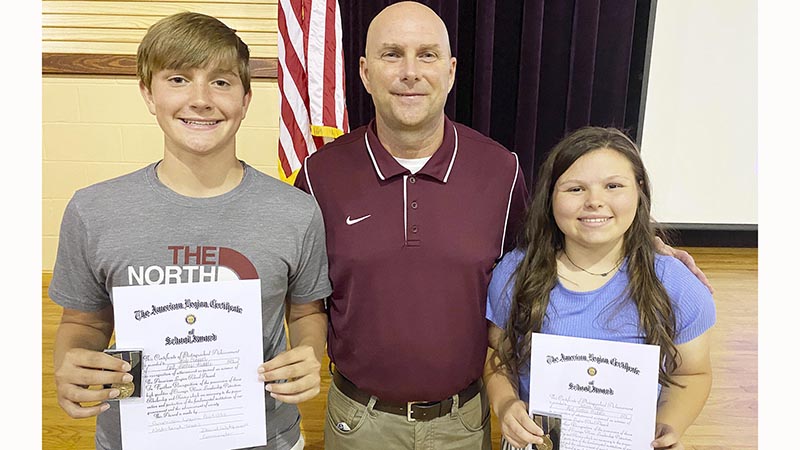 Tatum is a two-year member of the National Junior Honor Society and a two-year Lady Warrior Athlete. She was the recipient of the American Legion Award, received merit awards in Science, Social Studies, Language Arts and Math. She also earned All As for three years in middle school and was a library aide for her campus.

Tatum’s future goals include graduating with honors from PNG High School and pursuing a career in the medical field. She hopes to play golf and basketball in high school and become a member of HOSA and Geronimo Crew before she graduates.

Kale is a two-year member of the National Junior Honor Society and a three-year member of the Student Council; serving as Vice President his 8th grade year. Kale is a Merit Award recipient in Language Arts, Math, and Science and also received the President’s Education Award for academic excellence. He was on the A-Honor Roll and also played football and basketball for two years while at PNMS.

Kale has always had a desire to work with special needs kids and enjoyed serving as the Life Skills Aide this past year. In his spare time, Kale loves to play baseball for the Gladiators Organization and has been selected to multiple all-tournament teams. He also loves to fish, hunt and ride four wheelers anytime he gets the chance.

Kale and his family are members of St. Elizabeth Catholic Church and he looks forward to joining the high school youth group this fall. Kale’s goal is to play baseball at the next level and hopes to one day follow in his mom’s footsteps and graduate from Texas A&M University.