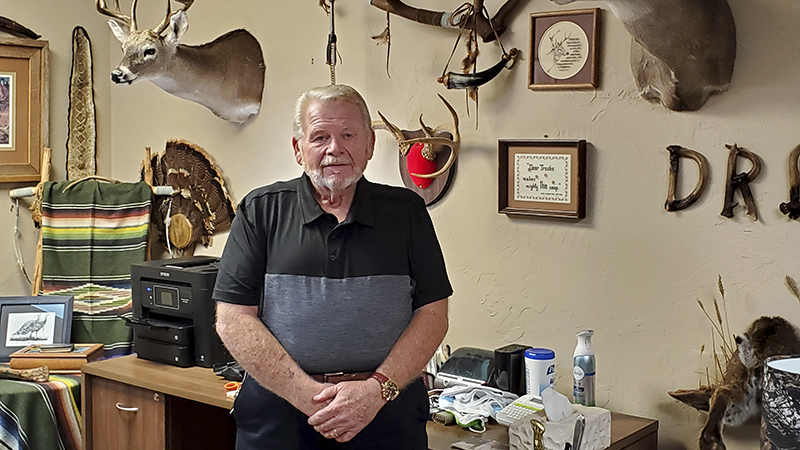 Pastor Rick Erwin of Procter Baptist Church is retiring after 33 years at the Port Arthur church and more than 50 years as a religious leader. (Mary Meaux/The News)

After 33 years of leading the congregation at Procter Baptist Church, the Rev. Rick Erwin is retiring.

“I’ve loved every minute of it,” Erwin said Wednesday from his church office, where he’s in the process of packing up his belongings. “I love these people with all of my heart.”

While going through his papers he was shocked at the number of people who he has buried.

“But then I’ve also done many, many marriages in 33 years. And then a lot of counseling, and then a lot of baptisms. Many, many. I have not kept count but I can easily say it’s in the 100 range,” Erwin said.

Then there’s been the mission trips with the youth of the church down to south Texas and Mexico.

Erwin sat back in his chair and spoke of how he came from Glenmora, Louisiana, and ended up in Port Arthur.

“My daddy was my school principal, my pastor and my boss,” he said, adding he was the baby of the family with an older sister and brother who left home before he got to high school.

He worked as an embalmer and funeral director because he wasn’t interested in being a pastor — at first. He was working with the funeral home while attending college and it was there he met the woman who would become his wife, Lynn.

“It took me two-and-a-half years to get her to marry me,” he said of the college student/twirler. “But she did and she’s been the apple of my eye ever since. She gave me two sweet daughters who are married and doing great.”

Erwin attended Louisiana College and later Southwestern Seminary, where he earned his master’s and doctorate degrees.

Through the years he has pastored at churches in Arkansas then came to Port Arthur in 1988.

Erwin isn’t one to back down from a battle. In fact he was instrumental in keeping gambling from the area for a while.

“And for whatever reason, I don’t guess that we (pastors) totally stopped it but they (pro-gambling) backed off and didn’t bring gambling here until just recently and they’re talking about putting a racetrack in here. We felt it would be a downfall for our community if they started opening casinos here and things like that,” he said. “So myself and one other pastor led the battle and all the other pastors stepped in and really helped us fight that battle. I consider that a blessing to our community.”

Through the years the church has opened its doors to other churches that needed a place to worship. The church has flooded twice and seen many other storms, including one that blew the steeple off the roof.

Erwin said the decision to retire wasn’t an easy one but he is doing so for heath reasons.

Erwin, who had been adamant about wearing masks and not shaking hands, worked to keep his congregation safe. He ended up contracting COVID-19. While his wife’s case wasn’t serious, his was.

At this time the hospitals were full so he was bedridden for several weeks while fighting the illness. Though he recovered, he was left with lingering issues.

“I lost my voice to a great extent. I can’t talk very long and that’s why I’ve had to shorten my messages and be real careful,” he said. “I don’t talk much before Sunday morning, and Sunday night I have to be real careful. If I’m preaching too long, I just get to where I can’t talk. Secondly, I’m having real struggles with my memory. All of that happened because of the virus.”

Erwin said he totally panicked at that point, when all of a sudden he couldn’t remember things. He ended up going to a doctor in Houston who understood what was going on and the doctor has helped with getting his memory back.

The longtime pastor told his congregation it is time for him to go and for them to find a young man that can do the work of a pastor, not just a preacher.

“The difference is when we go to seminary we are trained in Biblical understanding, Greek, Hebrew, how to preach, how to get a sermon to have a passage, things like that. But the depth of a pastor over — and this does not come up against those who are just preachers in churches, like our church in particular, they need a shepherd over the sheep, they need a pastor, and that one thing that I love about Proctor Baptist Church is from day one they allowed me to be a pastor,” he said. “The preacher may stay in his office; do some counseling and other tasks but there are also homebound people and elderly who can’t get out anymore.”

He gets out of the office and goes to see those people because they can’t come to the church.

And while this is a modern time where the congregation can watch the service on TV or their phones, there’s nothing like sitting down and having a face-to-face conversation and prayer together, he said.

Pastor secretary Tonja Hurt has worked with Erwin for decades. Her office is next to his.

“I have been his assistant for 22 years. He’s been a great boss, pastor and friend. I’m really sorry he’s leaving, but I’m excited for this new adventure,” Hurt said.

Erwin will preach his last sermon at the 10 a.m. June 13 service, which will be followed by a reception from 2 to 4 p.m. The church is located at 4401 Jimmy Johnson Blvd.