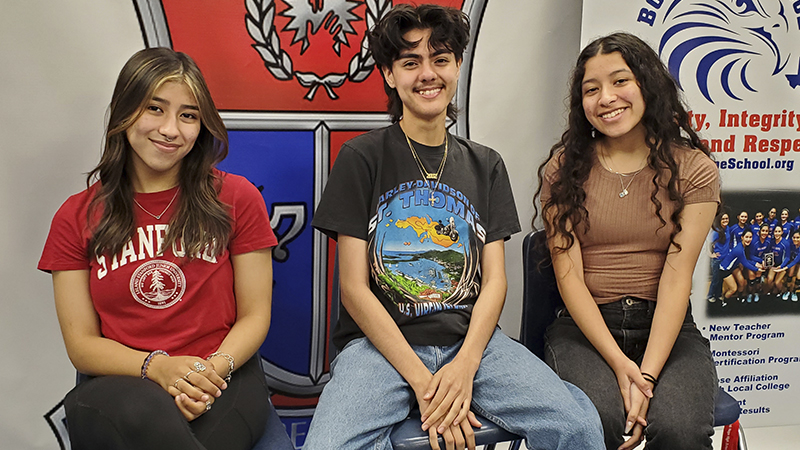 Jazmin Sanchez, left, Eric Barragan and Tammy Gallardo are set to graduate from Bob Hope High School next week. Barragan is valedictorian, Gallardo is salutatorian and Sanchez is ranked third in their class. (Mary Meaux/The News)

I often say I have one of the coolest jobs there is because of the many people I meet.

I was reminded of that again earlier this week when I sat down to talk to the top three graduating seniors at Bob Hope High School.

Valedictorian Eric Barragan, salutatorian Tammy Gallardo and third-ranked Jazmin Sanchez are very down to earth and grounded individuals — much more than I was at their age.

When I was a senior in high school, my goal was to graduate. I only took the necessary courses, none of which were college-prep. It wasn’t until I was around 30 that I decided to go to college.

These three students have had an interesting high school journey to say the least. They started high school the same year Hurricane Harvey hit.

Eric, who is a dual enrollment student along with the Tammy and Jazmin, remembers worrying about his classes at Lamar State College Port Arthur being canceled due to the storm.

He was worried about his classes. That says a lot about his dedication to his education.

Then there’s the pandemic and last school year’s move to virtual learning — something that was difficult for all three scholars.

“It was such a change and a really drastic one. I like to learn in the classroom. I can’t learn online,” Jazmin said while saying she didn’t learn much during that time, but her grades say different.

The three friends discussed this among themselves, talking about how they modified their learning experience around their home lives, which include distractions.

Tammy had a different experience as her family had to move to Houston for a short time. The place she was staying at had no wifi and she missed her friends.

“It was really tough mentally because I didn’t have any motivation because I was so sad,” Tammy said “I wasn’t in (Port Arthur), I was somewhere else. I couldn’t hang out with my friends I couldn’t see anyone. I couldn’t talk to anyone. So it really took a hit on me, especially online school. I felt like I just couldn’t do it.”

But she, and the others, did. And on June 11 they and the rest of their senior class will graduate.

Then they prepare for college life.

Eric plans to attend the University of Texas, where he will pursue a blended major of psychology and computer science.

Jazmin plans to attend Stanford University, where she will major in sociology and minor in international relations.

I’m looking forward to see what great things these three will do in the future and hopefully I’ll still be around to tell the new chapter of their stories.