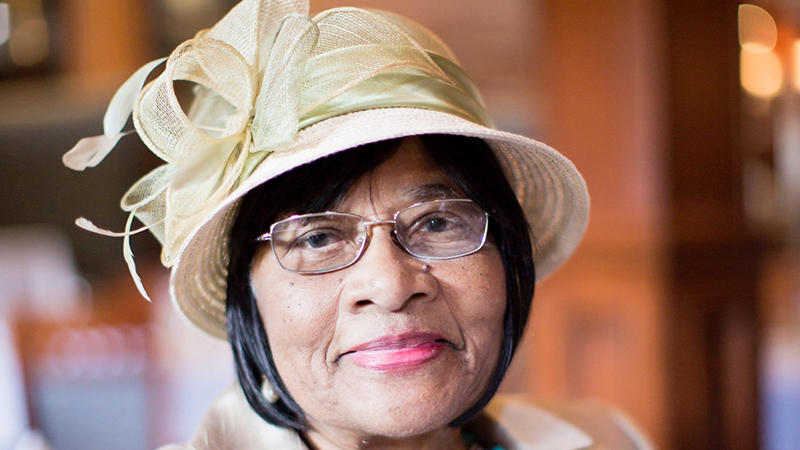 Theresa M. Barnes, age 89, of Port Arthur, passed from this mortal world on the evening of May 23rd.

She spent her last days surrounded by family and loved ones at Harbor Hospice House in Beaumont, TX.

Ms. Barnes was an important influence in the life of many in Port Arthur.

She was affectionately known by many simply as “Miss Theresa”; and to her family as “Grandma T”.

She was famous for her pecan candy and baked goods. She dedicated her life to caring for others.

She initially worked at Kelly Drug Store; then for many years she worked at the Lillie Nichols Nursing Home.

Following that, she spent the majority of her employed years at Park Place Hospital working in Labor & Delivery as a CNA.

For decades at Park Place Hospital, she witnessed and participated in the birth of hundreds, if not thousands, of new Port Arthurians.

She was known as a caregiver, and was called upon by many in the city to care for their family members when a home caregiver was needed.

This included many notable leaders of the city.

Miss Theresa never met a person to whom she wouldn’t offer help if needed.

It was not unusual for her to take in emergency foster children at midnight, or provide food and drink to anyone who was hungry.

She volunteered in her community, both for her church, and for the community schools.

She was a member of the Experience Corp, providing tutoring for elementary children in PAISD.

She was a devoted Catholic, being a member of Sacred Heart Catholic Church for over 65 years.

At Sacred Heart, she was a member of: The Altar Society; The Bereavement Committee; The Golden Age Group; and a CCD teacher.

Most of all, Miss Theresa was the “world’s greatest mother.”

She single-handedly raised seven biological children after going through a divorce 56 years ago.

She also had a hand in raising many other relatives for significant portions of their formative years.

She was a woman with a single-minded vision of excellence for her seven children.

She was known to be strict and demanding of perfection, but all the while showing them unrestrained love.

It was these traits that allowed her to influence and guide her children to achieve both academic and professional success.

It is their achievements in life that will remain as one of the greatest legacies that she leaves as an example to all who are faced with life’s challenges.

If you knew her, you then knew that she accepted nothing but your personal best, and would be your greatest cheerleader in helping you to experience your personal success.

She leaves 16 grandchildren and 15 great grandchildren to cherish her memory. Two of her grandchildren, Van Lacey and Tailar Lacey were raised by her after their mother’s death and were essentially her children. She also leaves behind a host of nephews, nieces, including special niece Vickey Carter as well as other family and friends.

A mass of Christian Burial will be held at 10:00am on Saturday, June 5, 2021 at Sacred Heart Catholic Church in Port Arthur, with Fr. Anthony Afangide as celebrant.