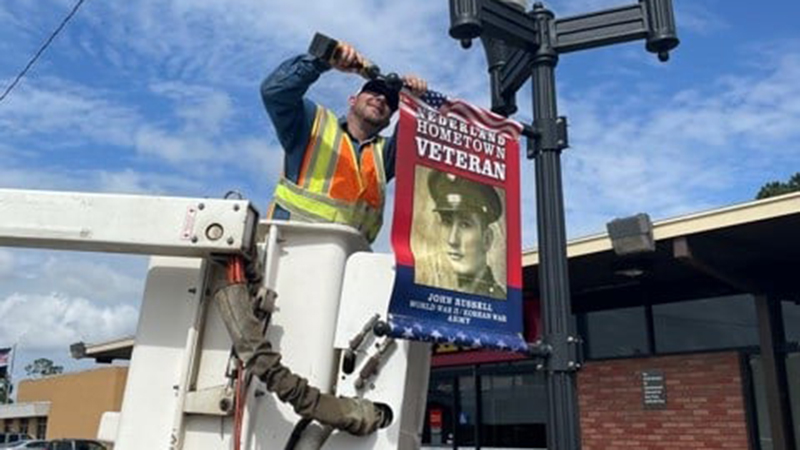 The sacrifices and current commitments of generations to the United States through military service are evident during a short stroll along Boston Avenue in Nederland.

City crewmembers installed 25 light poll banners featuring the images of 49 men and women with ties to Nederland who either served or are serving in the armed services.

The first-time project spearheaded by Parks & Recreation Director Angela Fanette was offered free of charge to those who participated.

“There was one individual who submitted a family member who was killed in action in World War II, and I got to read the telegraph that was sent to the family,” Fanette said. “I got chills.

“There are a lot of things we do that are important, and this is one of those things that means a lot to me. I know it means a lot to those families. I want to make sure we’re doing it as right as I can get it.”

The city announced in February it would recognize local veterans and active duty military by displaying a 24” x 36” picture banner on Boston Avenue between May and August.

The city has long displayed banners — football- and holiday-themed during the fall and winter — and is now honoring veterans in the summer.

Twenty-five banner spots are being utilized on Boston Avenue light poles with brackets, and vendor-printed separate images on front and back.

“I hope everybody is pleased with them,” Fanette said. “We’ll change the format every year a little bit and get better every year. I am pleased to see it come together. I have learned how we can make it a little more seamless for families in the future. I wished we had a 1,000 light poles, because we have that many folks in town.”

Those selected for the 2021 summer were the first to successfully submit family information. Included is a Veteran who served in World War I and tributes to active duty members.

Each honoree is an active duty member of, has been honorably discharged from or died in the line of duty in the United States Armed Forces (Army, Navy, Air Force, Marine Corps and Coast Guard, as well as the Reserves and National Guard).

Honorees must have been born or lived in Nederland.

Fanette said, for some, it was mothers who submitted on behalf of sons or daughters.

“There is a lot of pride there, and it is interesting to know their stories,” Fanette said. “I had the opportunity to see the stories for each one of these and it has been one of the most interesting and exciting parts of my job to be a very small part of that. I certainly hope the public enjoys seeing them. I think we will continue doing this to showcase more information, more of our veterans and active service members from our community as we go years forward. I do intend for us to do this seasonally.”

Each submission was vetted with various documentation including a DD214 verifying service.

“For the 49 we have up with their ties to Nederland, there are hundreds more, and that shows an awful lot about the willingness to serve in our community,” Fanette said.