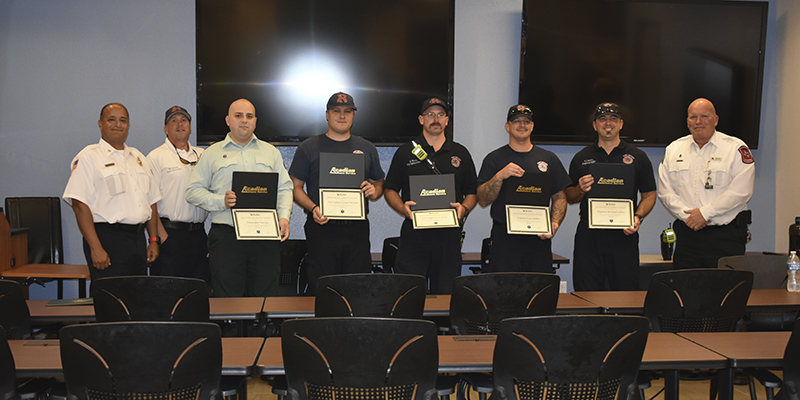 PORT NECHES — Most of the time, first responders don’t know the outcome of their calls.

They arrive at the scene, do what is needed and then leave for the next emergency call.

On Tuesday, four Port Neches firefighters and two Acadian Ambulance EMTs learned the man in a single-vehicle crash they responded to months ago had survived.

Manley was unable to attend the event. 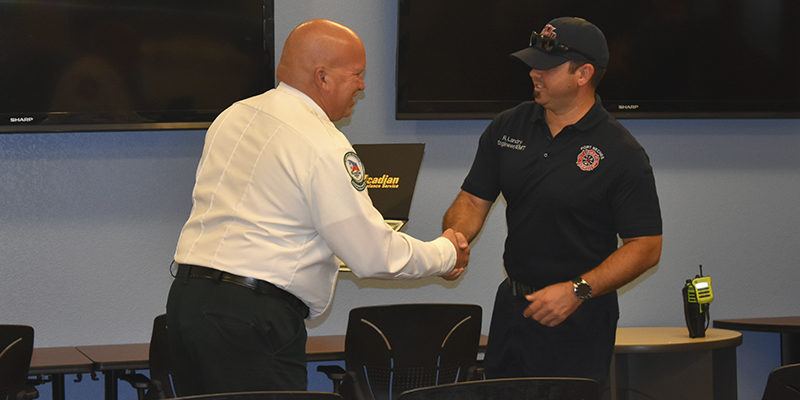 The call came in Feb. 24, dispatching PNFD and Acadian Ambulance to a wreck where a vehicle struck a utility pole on Magnolia Avenue.

The fire department was first on scene and saw the utility pole leaning over the car. When they approached, they noticed the driver wasn’t breathing and had no pulse. The firefighters pulled the man out of the vehicle and began CPR, said Capt. Tyler Hebert, who has been a firefighter for seven years.

“That got us thinking that maybe it wasn’t injury-related to the accident but that it caused the accident,” Hebert said.

Firefighters believe the man suffered a medical related incident that led to the crash.

PNFD put the man on a spine board because they did not know the extent of his injuries and had him ready to transport when Acadian arrived. Their medics took over and continued care of the victim and brought him to the nearest hospital. He made a full recovery and was discharged at a later date.

Acadian EMT Chris Trevino, who earned the award along with the others, gave credit to the firefighters, saying they did all the work.

Likewise, the firefighters didn’t feel they needed the recognition, though they appreciated it.

“It’s good hearing that the patient survived, but we don’t do this job for recognition; we do it to save lives,” said Zach Watts, who has been a firefighter for six years.

PNFD Chief Eloy Vega said he is proud of the firefighters, saying this is what they’re trained for and it shows their commitment to the community.