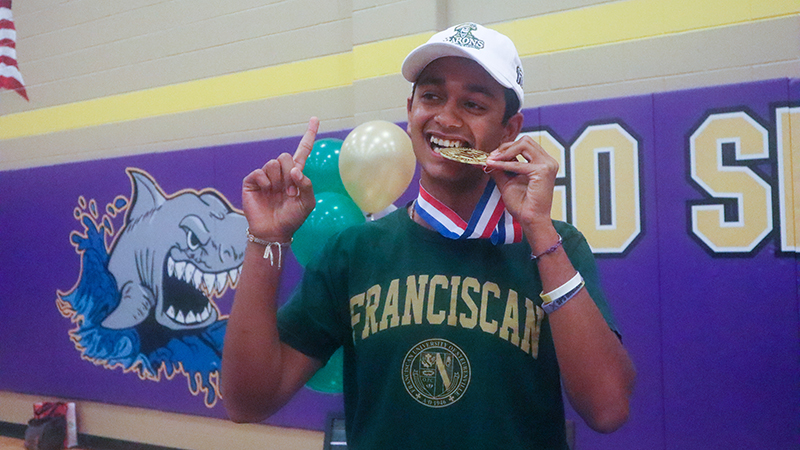 SABINE PASS — Sabine Pass tennis player Travis Mistry might have had one of the best five-day stretches in his young life.

The senior went to the UIL 2A State Championship and walked away with a gold medal last week, and turned around and signed a letter of intent to play tennis at Franciscan University on Monday.

Mistry’s family and friends surrounded the state champ as he put pen to paper in the Sabine Pass gym. 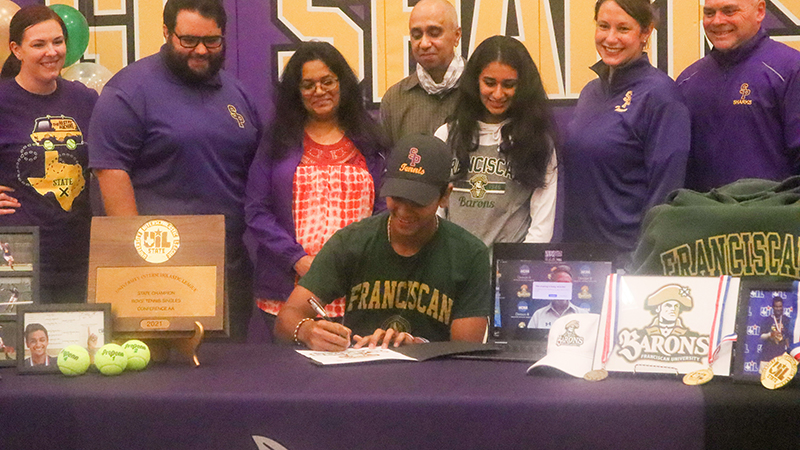 Travis Mistry, of Sabine Pass, signs a letter of intent Monday to play tennis at Fransican University in the fall. (Chris Moore/The News)

“It was surreal,” Mistry said of the signing. “I never once expected anything this grand. Not because the school is cheap or anything. I just expected it to just be a small thing with my family. When I saw everyone here and the way the table was decorated, it was beyond what I could even imagine.”

Mistry said he had been waiting for some scholarships to come through.

“I’ve been talking with them for about two or three years,” he said. “I wanted to go to this college for a while, but funding was an issue. With outside scholarships coming in and they gave me huge money to come there, we were able to afford it. As soon as we could, I called them up and said, ‘Let’s make it happen.’”

The senior said he chose Franciscan University based off of conversations he had with the coach. 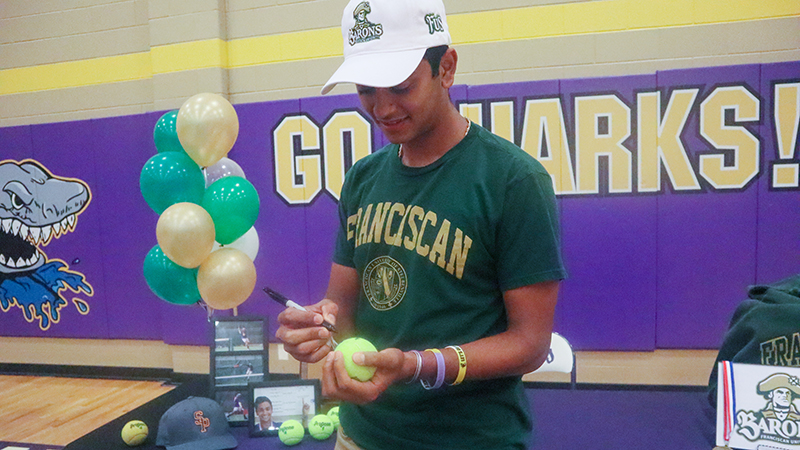 “It is a Christian University,” Mistry said. “That was the first thing that drew me to it. All of the other coaches, and I talked to quite a few, had said they will do this or that to get me there, but (Franciscan Tennis Coach Scott Greve) came about it very differently. He said that if God wants me there, he will put me there. When he said that; it just stuck with me.”

Mistry was able to play his friendly rival James Minard, of Dewyville, in his final high school match.

“Before district, we said we both had a chance to go to state,” Mistry said. “I was, arguably, more excited to get to state finals together and represent our area than I was for the match itself, but it felt amazing to come out on top. He played out of his mind and I brought everything I had.”

Both played each other at district, regional and state.

Sabine Pass Tennis Coach Zachary Defrancis said he was proud of his student.

“As a coach, this is what you always want for your student,” he said. “You want to see them work hard. You want to see them motivated. In the end, you want to see them succeed. Travis winning state was the top of the mountain for us. He has worked hard over the last four years to reach this. This is a big deal for him, for me as a coach and for the Sabine Pass as a community.”