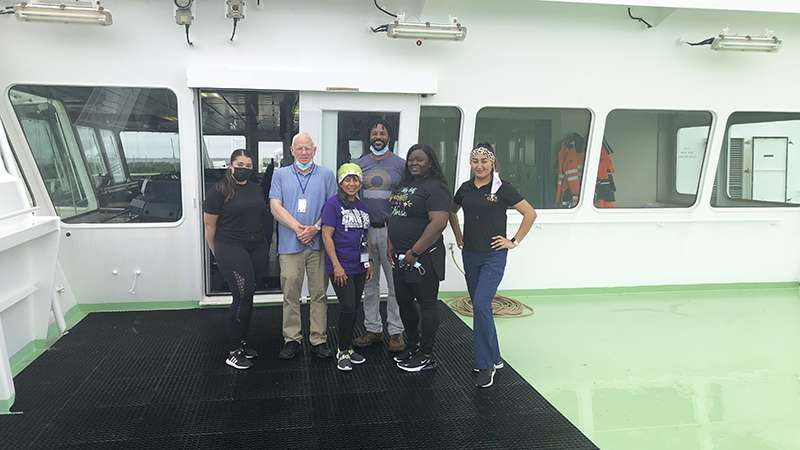 Crewmembers on a liquefied petroleum gas tanker bound for the Port of Gibraltar are vaccinated thanks to efforts from the Port Arthur Health Department and the Port Arthur International Seafarers’ Center.

“It was so fun,” said Health Director Judith Smith. “We actually went on the ship and there were 21 crewmen. The whole blessing is that these gentlemen were so happy to receive this vaccine because they were not able to receive it easily in their own country.”

It was the first assignment for the health department’s Strike Team, announced earlier this month as a venture to bring vaccinations to those who are bed bound or otherwise unable to make it to the vaccine center.

“When we applied for the grant, the idea was we’d give vaccines in a non-traditional setting,” Smith said. “It was fun and so rewarding.” 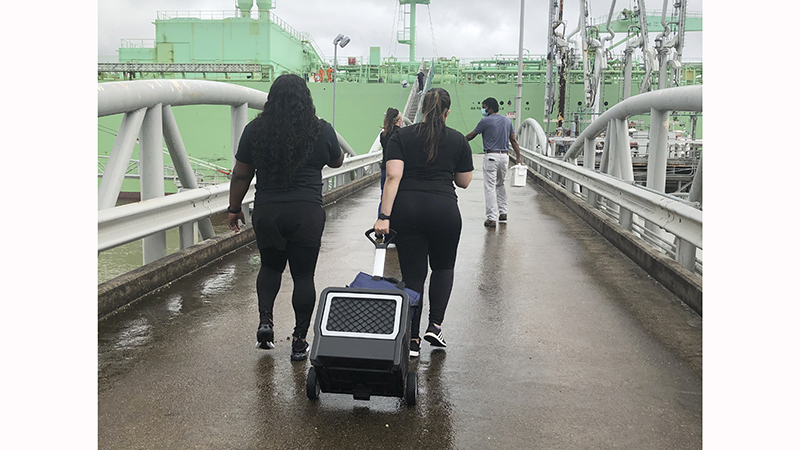 The Port Arthur Health Department Strike Crew went aboard the BW Aries to give vaccines, and will begin going to homes on Wednesday. (Courtesy of Judith Smith)

Doreen Badeaux with the Port Arthur International Seafarers’ Center and the Apostleship of the Sea USA said they’ve received calls from all over the world as crews headed to the area look for vaccines.

“What we’re seeing is at some ports, people are trying to charge the ships $800 per person to get vaccinated, and that’s highway robbery,” Badeaux said. “That’s another reason we’re trying to help these people.”

The BW Aries, registered out of the United Kingdom, docked Friday at Sunoco Energy Transfer in Nederland. The Strike Team arrived and went onto the tanker to vaccinate the crewmembers.

“The nurses had a ball,” Badeaux said. “They were treated like royalty. There were offered food and refreshments, and given a tour of the bridge of the ship. They got to see all of that area and take pictures.”

They weren’t the only ones capturing the moment.

“They were taking pictures and selfies,” Smith said of the seafarers. “While we were giving vaccines, they were having other crewmen take pictures of them getting their vaccine.”

Smith said she and the Strike Team joked on the way back that they had gone international.

“We were really blessed,” Badeaux said. “Judith was just exceptional to work with. They have such a massive job to do in taking care of all the vaccinations throughout Port Arthur and Mid County. They were very gracious about coming out.”

The process to get seafarers a one-dose vaccine could mean the difference between going home and staying on a vessel.

“Foreign seafarers are often on board 9-11 months at a time,” Badeaux said. “Some countries (were hit with COVID-19) earlier than us. Some seafarers in January of last year had problems getting off the ship and going home. We ended up having seafarers who were stuck on board 16 months or longer.”

Badeaux added that they plan on working to vaccinate more incoming seafarers.

Now that they’ve started mobile vaccinations, the Strike Team will head out Wednesday to begin vaccinating homebound persons in Mid and South county.

The hub, which started at the Robert A. “Bob” Bowers Civic Center and is now located at the Texas Artists Museum building, was the department’s priority when vaccines first began.

“We received 700-1,000 people a day,” Smith said. “We needed everybody over there. I told everyone to give us time and we would develop a Strike Team.”

Now that the efforts at the hub have slowed down, the mobile unit is ready.

According to information from Texas Health and Human Services, 39.39 percent of people 12 and up in Jefferson County have received at least one dose of the vaccine, while 30.85 percent are fully vaccinated.