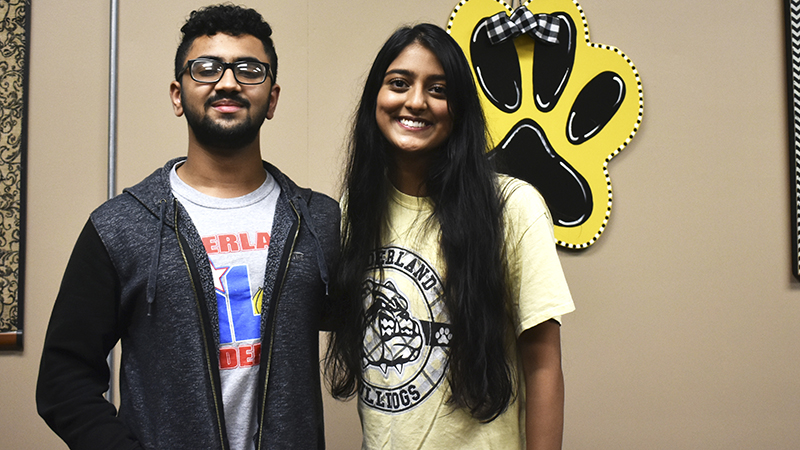 NEDERLAND — The top two students at Nederland High School will soon embark on new journeys leading them to the University of Texas and Rice University for study in their respective fields.

Valedictorian Fayza Dholasania and salutatorian Adeel Sumar have been building on their educational foundation for years, and each knows it takes hard work to be successful.

Dholasania remembers when she was a freshman, her mom said she wanted to see her on the stage where the top students are seated when she graduates.

“That was their goal for me, and so I had that throughout high school, so I just did my best to get there,” Dholasania said. “I told my mom I just didn’t make it to the stage, I went over and beyond. We were laughing about that like, ‘cute, she took my words too literally and just went beyond.’”

Her advice to incoming freshmen is words she was told and took heed of — not to take your freshman year lightly.

Dholasania plans to attend the University of Texas and major in business.

She considers herself a people person and an all-around student who doesn’t succeed in just one subject, which is why she chose business. Some people have that passion for one direction, such as becoming a doctor, but with business there are many paths to choose from.

Dholasania would also like to have a double major, maybe adding finance or management information systems to her pursuit.

Her activities include Key Club, National Honor Society, and Spanish Honor Society. She was a summer intern with Upkey last year, an education and career development software service and she has been part of the Ismailia Community Engaged-In Responsible Volunteerism, or iCERV, helping people after disasters as well as other volunteer opportunities.

Donna Byars, 12th grade counselor at Nederland High, said Dholasania is a driven and goal-oriented young lady who never settles for less than her best.

“There is unlimited potential for Fayza, both personally and academically, and her qualities of leadership, determination and commitment to excellence will bring her much success in her future endeavors,” Byars said.

When not in school, she enjoys traveling, seeing new places and trying new foods.

Sumar plans to attend Rice University, where he will bring his passion for math. There are a number of possibilities ahead including computer science or engineering.

Either way, he’s looking for a challenge as he moves toward a career.

Sumar doesn’t care much for school rankings and instead believes the things that a person has accomplished over a ranking are more important.

So, when he achieves something that took a lot of effort it has more value to him, as other see the accolade and not the hard work behind it.

“There’s a quote I saw somewhere, ‘hard work beats talent when talent doesn’t work hard.’ You can have the potential to do great in anything,” Sumar said. “There’s so many people who have the potential to be great in something but if you don’t actually put in the effort, it’s never going to amount to anything.”

When he’s not studying or practicing, he enjoys music and watches a lot of YouTube channels from math and science to cooking and comedy.

Byars said Sumar is an exceptional student who seeks ways to challenge himself.

“His approach to learning is one of discovery, which is refreshing, and he handles his success with such grace,” Byars said. “I look forward to hearing about all of the great things he will accomplish in his future.”

Adeel Sumar is the son of Nadia Sumar and Azim Sumar.

Dholasania said when she hears congratulations from teachers and counselors, she feels she should be the one congratulating them because the accomplishment is not just hers but it’s to share with her family, her teachers from elementary, middle and high school, the counselors and the school district.

“I just feel like it’s just, I wouldn’t be here without them,” she said. “I know it’s what I put into it; yeah I spent like hours studying, blah blah. But you’re the one that taught me…when they taught me time management, life skills and I’ve interpreted it to succeed.”

Sumar told of how his dad would ride a bike to work when he was 12 and had to drop out of school to help the family financially in Pakistan. His father and uncles moved to California and his dad took some college classes and earned the equivalent of a bachelor’s degree in business.

Then with some finance and accounting information, he and his brothers set up a business.

He moved the business to Texas, where the conditions for the business were economically better, then slowly began to move more of his family here.

Dholasania summed up the immigrant success simply for both of them.

“Our dreams come true, even our parents’ dreams,” she said.