Memorial educator Azineth Buan finalist for LifeChanger of the Year 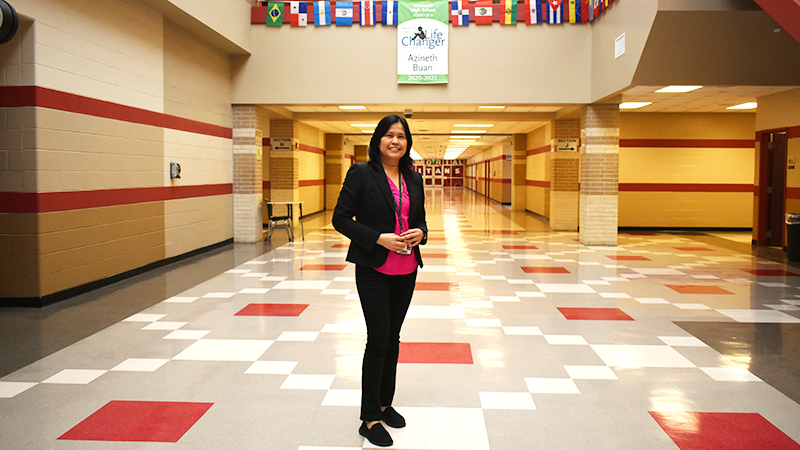 Memorial High School math teacher/department head Azineth Buan looks to the stars on her ceiling with names of students she has helped. Buan was named a grand prize finalist for LifeChanger of the Year. (Mary Meaux/The News)

Success stories are the stars on Azineth Buan’s classroom ceiling.

Each star has a name and is decorated by a student who pushed toward success, some having further to go than others.

The Memorial High School math teacher/department head goes above and beyond the confines of her job, and for that National Life Group named her a grand prize finalist for LifeChanger of the Year. She is one of five finalists for the 2020-2021 award and was chosen from a pool of 733 nationwide nominees.

Buan rises to the day-to-day challenges that come with teaching. If there’s a student who decided they will not pass the class or graduate, she steps in. She tutors those students and lets them know failure isn’t an option.

“So I told them at the end of the testing, I wanted you to create your own star and because you are my star, you’ll be on my ceiling. And as long as Ms. Buan is alive and at Memorial High School, the stars will be here,” Buan said. 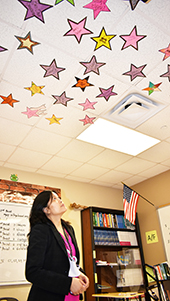 Memorial High School math teacher/department head Azineth Buan looks to the stars on her ceiling with names of students she has helped. (Mary Meaux/The News)

A member of her church community, Josephine Sibayan, nominated Buan.

“Through her leadership, the mathematics department has accomplished numerous projects to extend the students’ learning outside the classroom,” Sibayan said in the letter. “(Buan) has also developed an incentive program that focuses on rewarding students’ positive behavior, attendance and excellence in their education.”

The award comes with a $2,500 prize for the educator and another $2,500 for the school. Because of state guidelines, the school cannot accept the funds so Buan will donate them to a non-profit. She chose the Port Arthur Education Foundation, which provides grants for educators. This means she will be giving to an organization that has previously funded grants for her classroom, she said.

This isn’t the first time Buan has been recognized as an educator.

There are numerous comments on the LifeChanger of the Year website for Buan:

“(Buan) is the most kindhearted teacher I’ve ever met. She’s taught me many things in her Statistics AP class as well as gave me the motivation to learn,” Phung Huynh said on the website. “I’ve never really enjoyed math or anything with numbers and letters combined, until her class this year. Her energy and efforts for her students, peers and the community can be greatly seen in her efforts. I truly appreciate her, because without her, my senior year wouldn’t be the same. I’m so thankful towards her and her willpower to see everyone succeed. She’s the best!”

“I was struggling with algebra for a pretty long time, I failed many times until I got to meet Ms. Buan,” Velazquez said. “In four days she managed to teach me everything I needed to pass my algebra test, and wow I was impressed. I understood everything, she has such a patience with teaching. She made sure I was learning and understanding everything.”

Dr. Glenn Mitchell, principal at MHS, also penned a comment on the webpage.

“What a fantastic educator. Ms. Buan has made significant impacts on the students of Memorial High School for the past eight years. Our students have made great gains in math under her direction, state assessment were increased significantly through her direction,” Mitchell said. “Ms. Buan is the department leader who does not request teachers to participate in any activities that she does not initiate herself. She demands the best in each student and encourages them to always do their best”

On being a teacher

Being a teacher is a devotion to nurturing young minds and helping them succeed. Her students are her children and she often calls them son and daughter, though she has children of her own.

She has senior students in and out of her room for extra help and some sit next to her so she can coach them along. One such student said he wasn’t going to succeed or participate. After a conversation with Buan, the student popped his head in her room the next day and asked if he could come in.

“He was the first ace in my room. I said come in, come on son,” she said. “That’s why every time that happens, that’s my happiness. That’s my true happiness. That’s my pride. It’s, it’s just like to, to change the mindset of these kids. And the moment that changed. Oh my goodness. “

“There is no money in teaching, but every time you see that, that this child changed because of you, then I’ve touched a life,” she said. “I’ve changed the way he thinks. The ‘I don’t care if I graduate or not.’ But then the moment he stepped out of my room, I knew that, you know, he will be excited to grab it (success.)”