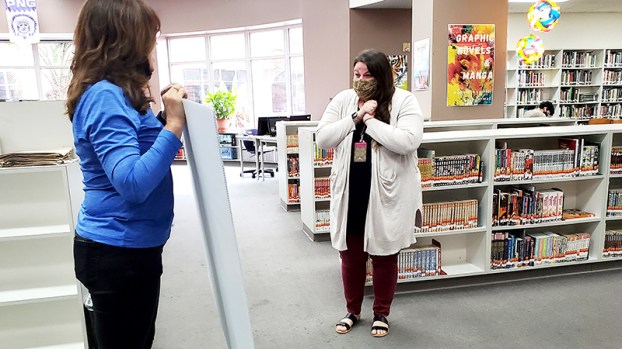 Candice Curran, librarian at Port Neches-Groves High School, left, reacts to learning she is a grand prize winner of a 2021 STEM Innovation from Indorama Ventures. Kim Hoyt, senior manager at Indorama in Port Neches, is holding the giant check at the school on Wednesday. (Mary Meaux/The News)

PORT NECHES — Magnetic levitation may sound like something otherworldly, but eighth grade students at Port Neches Middle School’s wood shop will be able to delve into the science behind the magic courtesy of a grant from Indorama Ventures.

Teacher/Coach Brian Cates was presented with a $3,000 check Wednesday from Indorama Ventures as grand prize winner of the 2021 Science, Technology, Engineering and Math, or STEM Innovation Grant.

Cates has wanted to do the magnetic project for a while. His students have studied transportation and watched videos of amusement parks and now all of the pieces are coming together.

Cates plans to purchase Maglev kits to introduce the concept of magnetic levitation and compliment current curriculum that enhances the students’ real-world understanding of transportation and industrial technology. Experimenting with Maglev models will reinforce concepts about magnetism and electricity for the students, according to information from the grant. 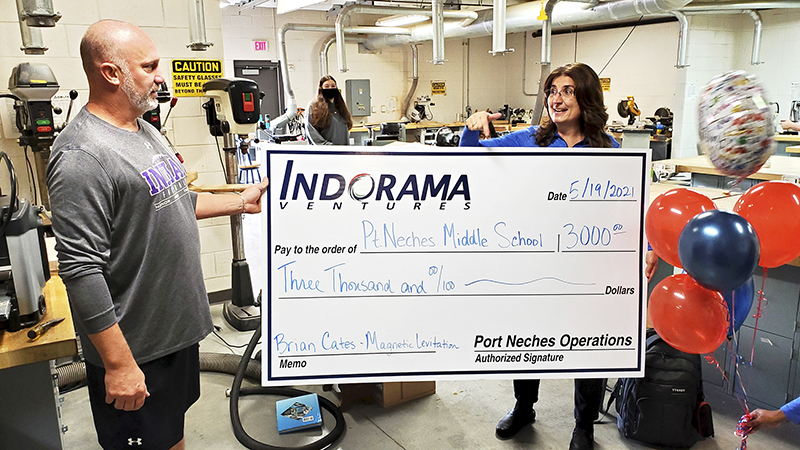 Cates explained that magnetic levitation plays a part in monorails, amusement parks and high-speed rails that are used in other countries. Each student will be able to build his or her own model cars for the project.

His students have also built balloon cars and rockets. On Wednesday, they were building tiny parachutes.

Chad Anderson, vice-president of manufacturing at Indorama Ventures in Port Neches, said the project would get students involved in STEM at an early stage and give them hands-on information.

“We, as a society, have gotten way from letting children know about vocations,” Anderson said. 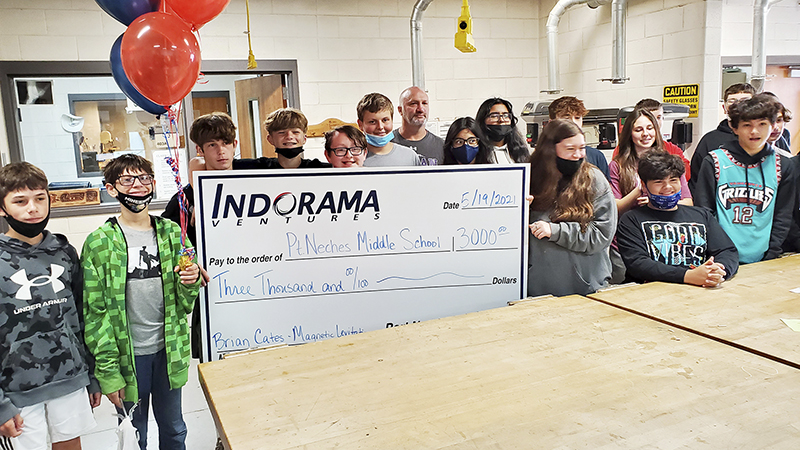 Port Neches Middle School Teacher/Coach Brian Cates, in back, poses for a photo with some of his wood shop students. (Mary Meaux/The News)

Kim Hoyt, site director at Indorama Port Neches, said the facility has been involved with the STEM Innovation grants for a number of years and is continuing the program that began with Huntsman.

Hoyt said Indorama understands most, if not all, careers in a refinery facility deal with STEM, extending beyond the traditional jobs to health and safety and finance, all of which have ties to science, technology, engineering and math.

Principal Kyle Hooper called the grant phenomenal. Hooper is also interested in the projects that go on in Cates’ class and is working with his brother-in-law, an engineer who teaches at Colorado Technology University, on getting the specifications for a windmill project that would charge cell phones. Hooper and Cates are eager for this future project as well.

Over at Port Neches-Groves High School, librarian Candice Curran was awarded $3,000 as a grand prize winner for the use of Makerspace materials.

“Oh my gosh, I’m so excited,” Curran said as she entered the main part of the library and learned she was a winner.

Curren plans to use the grant money to introduce Makerspace materials to the high school library, according to grant information. The program will encourage students to apply STEM learning Maker Maven Cubelets and K’nex and foster an interest in robotics, civil engineering and electrical engineering. Participating in Maker based activities will engage students in valuable science and engineering practices such as defining problems and designing solutions.

Curran said students come to the library before school or during a study hall-free period and work on various activities. With Makerspace they will be taking on a project that is fun and may not realize they are using STEM skills.

Principal Dr. Scott Ryan said Curran is “the best” as is liked by students and staff alike.

Curren was grinning ear to ear as school district administrators and others were on hand for the surprise presentation.