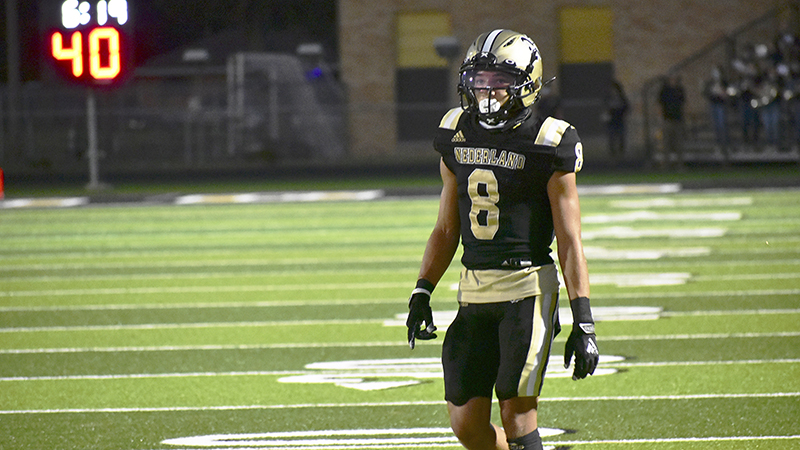 Nederland two-way standout Kyndon Fuselier will be one of several Bulldogs suiting up for the Nederland 7-on-7 team. (I.C. Murrell/The News) 10-2-20

NEDERLAND — After making it to the third round of the 5A Division II playoffs, the Nederland Bulldogs’ return to competition starts next week in the form of 7-on-7 action.

Players from Nederland will participate in the Newton Summer League along with Newton, Jasper, Livingston, Buna, Lumberton, Woodville, Silsbee, Little Cypress-Mauriceville and Dewyville.

The season kicks off Monday as Nederland plays Silsbee at Lumberton.

The phrase 7-on-7 refers to the players who are not offensive or defensive linemen.

Nederland Head Coach Monte Barrow said the tournaments are a good way to get an early or extra look at underclassmen. UIL rules forbid high school coaches from participating in the 7-on-7 tournaments, but coaches typically go watch.

“We will have some guys that we are looking at receiver,” Barrow said. “It is a different game. It is not football. The fact that they are out there competing as a team is beneficial.”

With last year’s starting quarterback Rene Cunningham graduating, Barrow said he and his coaches are looking at two potential replacements.

“Right now, it is Luke Broussard and Gage Driskill working at that,” he said.

Being able to develop timing with receivers could determine who lines up under center for the Bulldogs in the fall.

“It is extremely important for them and the receivers to be able to gain that trust,” Barrow said. “Different guys throw different balls with their speed. They will also develop some leadership qualities from the quarterback position. You only have so many seconds between plays. You are practicing some things that relate to next fall. Those things are going to translate into the fall on Friday nights.”

Nederland receiver Kyndon Fuselier will participate. The Bulldogs receiver led the district in receiving yards and touchdowns last season. He also doubled as one of the team’s premiere defenders at cornerback.

“It feels great to actually go out and compete against another opponent besides my teammates,” he said. “Our coaches harp on us to compete with yourself when the competition isn’t to your skillset, so being able to play against other teams is exciting. I’m looking forward to getting better and helping my team understand the game.”

Fuselier said the games are a great way to strengthen bonds and improve chemistry.

“We have a lot of freshmen and sophomores that really don’t know each other and the little tendencies they do,” he said. “This will be a great test for what we have to build on and improve for next season.”

Barrow said his players benefit from seeing athletes from another district. He said the players run the teams, which gives them an extra level of responsibility.

“Each team has to have a coach refereeing,” he said. “Most schools that have a team that travels around will have someone that is not affiliated with your coaching staff. For leagues like this, we are out there, but the kids run it. Your top guys run it.”