They saved a baby with no pulse. Wednesday they saw each other for the 1st time since. 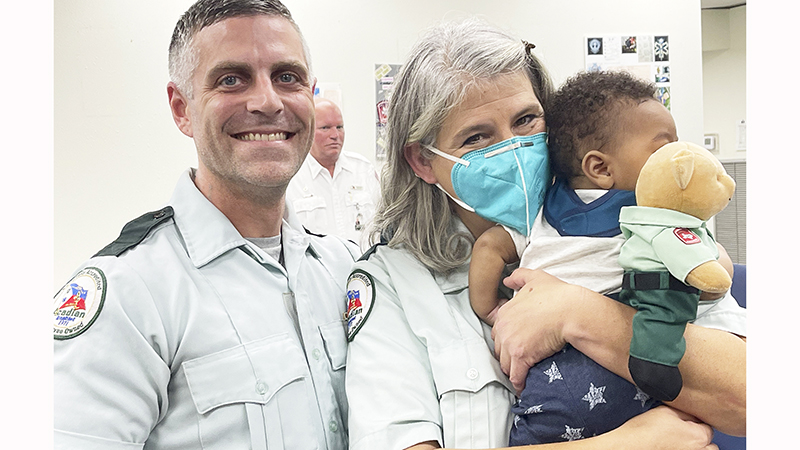 EMT Ryan Wilkenfield and Paramedic Heather Waites reunite with a baby they pulled from icy waters and resuscitated after a February wreck in Port Arthur. (Monique Batson/The News)

It’s not often that Paramedic Heather Waites and EMT Ryan Wilkenfield get to reunite with the people they save.

So it was no surprise Wednesday when tears began to flow as a family they pulled from freezing waters in February surprised them at an event.

The Acadian Ambulance Service employees knew they were being presented with the EMS for Children Crew of the Year Award. But the biggest honor came after the plaques.

On Feb. 17, a family was traveling down U.S. 69 about two miles from the Medical Center of Southeast Texas when their vehicle hydroplaned, flipped and landed upside-down in a median filled with icy water.

Waites and Wilkenfield were en route to the hospital with a patient when they witnessed the crash. They stopped and entered the freezing water, pulling five people from the vehicle.

But then a woman said her one-month-old son was still inside. 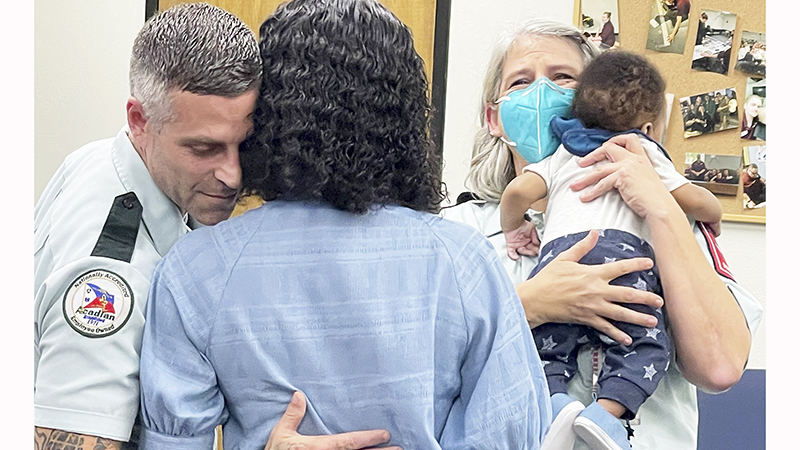 Ryan Wilkenfield and Heather Waites had no idea a family they saved in February would be appearing at their award ceremony Wednesday. (Monique Batson/The News)

“They didn’t know there was another baby in the car,” the mother, who asked not to be identified, told Port Arthur Newsmedia. “I just wanted to know, was he fine? Was he breathing? That was the biggest concern — was he breathing?”

He wasn’t. And he had no pulse.

The EMTs were able to resuscitate the infant, and then piled everyone in the back of the ambulance with the patient they were already transporting.

They knew prior to Wednesday’s ceremony that the baby had been released from the hospital and had recovered. But the last time they saw him, he was intubated and getting ready for a transport to Texas Children’s Hospital in Houston. 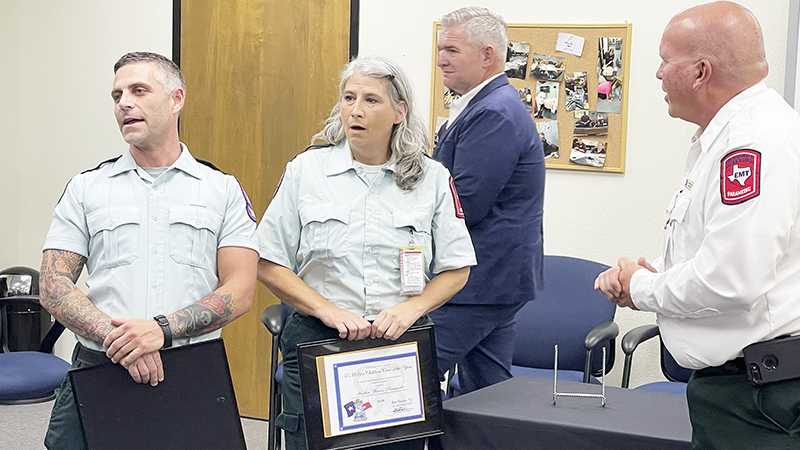 Ryan Wilkenfield and Heather Waites stand in shock as the family enters the room — the first time they’ve been together since the February crash. (Monique Batson/The News)

While it was the first time she had physically held the child, he’s been close to her since that night.

Under her shirt was a silver, heart-shaped necklace engraved with the baby’s name. It was a gift from her daughter, along with a note that read: “The necklace represents (name). While his heart may have stopped for a short while, it continues to beat because of you.”

Wilkenfield said he “blacked out” when the family appeared.

“I was in shock,” he said. “I don’t even know if I can describe it. It took a minute to register. God, this is amazing. It makes my day.”

The mother of the family said the child is fine and growing perfectly.

“I’m just thankful that they were there to help us,” she said.