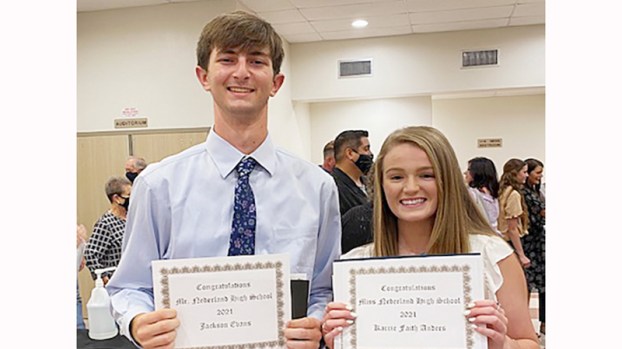 Jackson Anselmo Evans and Karrie Faith Anders were honored as Mr. and Miss Nederland High School for the Senior Class of 2021 following a vote by the faculty and school staff. (Courtesy photo)

The award, based on a vote by the faculty and staff of Nederland High School, identified the students through their four-year career for exemplifying integrity, dedication, school pride, civic responsibility, leadership and character.

Anders was involved in the Nederland High School Student Council all four years, serving as the student body treasurer her senior year. She was chosen her junior year to represent Nederland at the Youth Leadership of Southeast Texas Convention for 2019-2020.

She lettered in varsity soccer her sophomore year while earning the honor of team captain her junior and senior years.

During her sophomore year, she earned Newcomer of the Year, First Team All-District, and Academic All-District.

Anders has also been involved in HOSA (Health Occupations Students of America) the past three years at NHS. In addition, she was selected to participate in the

Outside of school, she volunteered during Hurricane Harvey to help out her

community during these trying times in any way that she could. Anders will graduate top 17 percent of her class and plans to attend Texas State University in the fall in hopes of pursuing a degree in nursing, specializing to become a nurse practitioner in the NICU.

Evans participated in various extracurricular activities in and out of school. He served as an officer and member of the Nederland High School Student Council for all four years while holding the office of treasurer his sophomore, junior and senior years.

He was selected to represent Nederland High School by the Nederland Independent School District superintendent as a student advisor for the past two years on various projects, including the design of the new high school.

In baseball, he earned Second Team All-State for academics as well as All-District honors in academics. During his senior year, Jackson served as the Nederland High School Good Sportsmanship announcer for home and playoff football games as well as a deflator for the Dog House during all football games.

Outside of school, Jackson volunteered to help others who suffered damage and loss during the numerous hurricane and flood relief efforts. Jackson also volunteered his time to help Adaptive Sports for Kids in their annual baseball tournament.

He has been an active member of the St. Charles Youth Organization and most recently the Knights of Columbus.

Evans will graduate with honors, ranking seventh in his class from Nederland High School.

He plans to attend Texas A&M to major in Business Administration with a concentration in accounting.