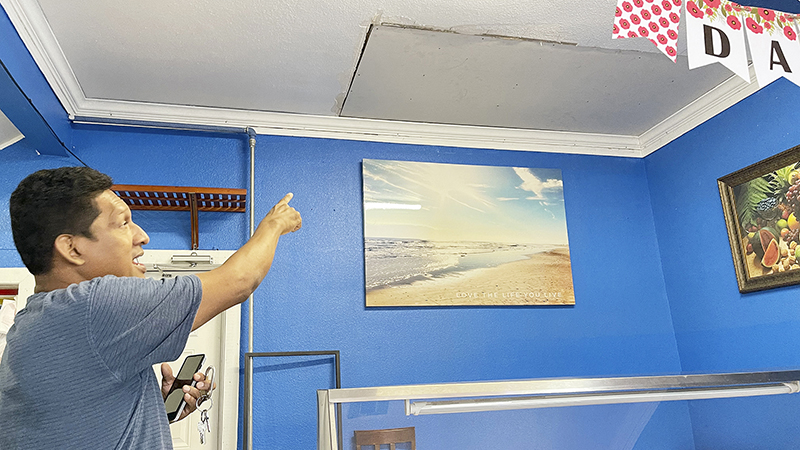 Dennis Medina, owner of Nicaraguan Caribbean Kitchen, had to close his restaurant at 1:30 p.m. Monday as floodwaters came into the building.

“It was bad,” he said Tuesday while cleaning the closed eatery located at 1629 Woodworth Blvd. “The trucks would pass by, water was coming in, the toilets were flooding. It was really, really bad.”

It wasn’t the first time Medina and his wife had to close their two-year-old business. After evacuating for Hurricane Laura last year, they returned to find the roof torn off and the inside flooded.

And still, the Medinas’ home has Harvey damage.

“But we’re still here,” he said Tuesday with an optimistic voice. “We’re trying to hang in there — with this pandemic and all that. We’re hanging in there.”

But he, like the rest of Southeast Texas, was bracing for Wednesday.

The region devastated by years of strong weather events is expected to see continued rainfall this week — a considerable amount Wednesday — after facing heavy floodwaters Monday. 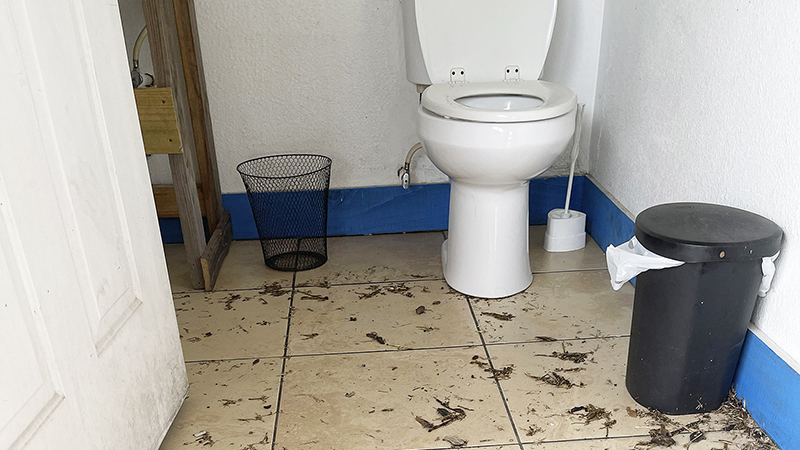 The restrooms at Nicaraguan Caribbean Kitchen in Port Arthur were flooded Monday, bringing in debris and trash. (Monique Batson/The News)

Erickson said the lowest amount of rainfall Monday in the Port Arthur area was 6 inches, although some regions to the west received up to 15.

Commissioners on Tuesday opened sandbag locations, including the Jefferson County Road and Bridge office at 7759 Viterbo Road in Nederland.

“I flooded in Harvey, so I understand PTSD from the storm,” said Commissioner Michael Sinegal. “That’s why I’m so passionate about making sure people have access to sand or whatever makes them comfortable. Sand bags wouldn’t have helped with Harvey, but if that gives anyone peace of mind, we’ll get sandbags out.”

Monday’s rainfall forced the commissioner to close the Port Arthur courthouse and sub-courthouse, putting a dump truck on standby to get employees safely home as water rose over roads.

The pooling caused a concern among residents in Port Arthur that the pumps weren’t on to drain the water. However, city officials assured they were on and working.

“We’ve been on it since very, very early this morning,” Mayor Thurman Bartie said Monday after more than 7 inches of rain had fallen in Port Arthur. “The rate of precipitation and the pumping capacity is not equal. If we’re getting a hard downpour, the pumps can only carry a certain amount of drainage.” 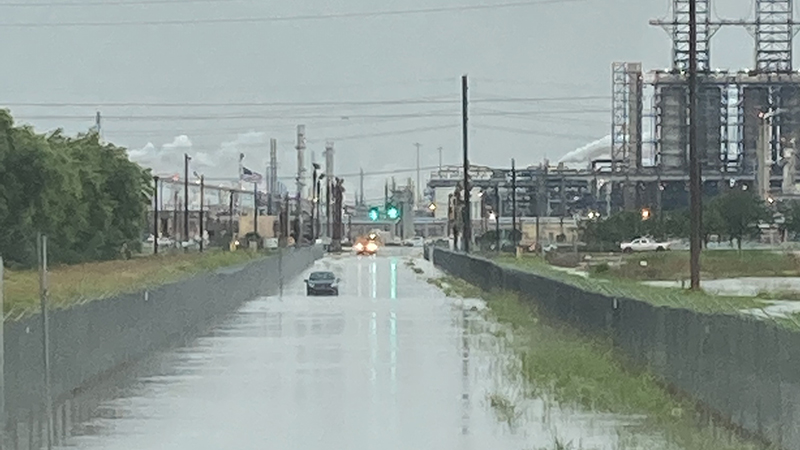 25th Street in front of Motiva was closed Monday with flooded water.

The pumps take water from residential areas and redirect it to retention and detention ponds before delivering it to the Gulf, City Manager Ron Burton said.

Some are automatic and do not turn on until rainfall has reached a certain water level, or until drainage efforts are not overwhelmed.

In Port Arthur, more than 26 inches dropped in one day.

“Harvey was scary. I never dreamed…,” Sinegal said, his voice tapering off. “I rode in a motorboat. If somebody had told me I’d be in a boat rescuing people, I’d have said they were lying.”

“We’re going to be looking at continued high rain chances…into Thursday and probably even into Friday as well,” he said. “So we still have several more days of heavy rainfall ahead of us.

Jones spoke from the NWS office in Lake Charles — an area destroyed last year by hurricanes Laura and Delta.

Jones said on Tuesday he was stuck in the NWS office and had yet to check on his house to assess any damage.

Jefferson County residents are encouraged to report any home or business damages through a survey at https://damage.tdem.texas.gov/. The purpose is to give local and state officials an idea of what has occurred through recent weather events. The site also supports the uploading of photographs.

Southeast Texas is under a flash flood watch through Thursday night.

Burton said residents can help with residential flooding by maintaining their own property throughout the year, specifically during storm season.