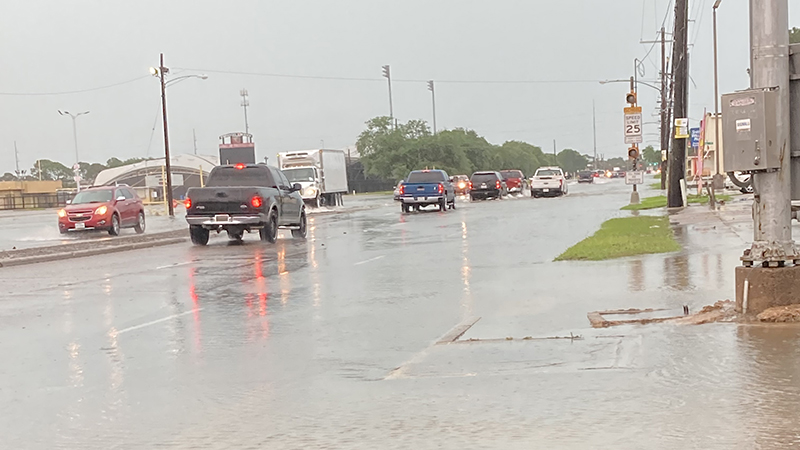 As heavy rainfall triggers concerns in residents of a city destroyed by Hurricane Harvey in 2017, officials in Port Arthur want to reassure them that they are working to minimize flooding.

“We are handling it the best we can,” said Port Arthur City Manager Ron Burton just before 1 p.m. Monday. “The thing is that, with the number of inches coming — in the last hour or so we’ve had two inches of rain. We’ve coordinated all efforts with the drainage district to make sure the pumps are working.”

The pumps take water from residential areas and redirect it to retention and detention ponds before delivering it to the Gulf, Burton said. Some are automatic and do not turn on until rainfall has reached a certain water level, or until drainage efforts are not overwhelmed.

But all, he said, are on and working.

“We’ve been on it since very, very early this morning,” Mayor Thurman Bartie said. “The rate of precipitation and the pumping capacity is not equal. If we’re getting a hard downpour, the pumps can only carry a certain amount of drainage.”

As more storms were expected throughout the day, up to 10 inches was forecasted for Southeast Texas, with some localized areas seeing up to 20 inches of rain.

And storms are predicted to continue throughout the week, with a 90 percent chance of rain Wednesday.

In Port Arthur, more than 26 inches dropped in one day.

“They see the water coming; I understand it,” Bartie said. “That’s why I’m trying to be as respectful as we possibly can be. We were all affected by it, so I understand their anxiety.”

Burton said residents can help with flooding by maintaining their own property throughout the year, specifically during storm season.

Bartie said, weather permitting, he intended on driving around the city Monday afternoon to talk with residents and reassure them that the pumps were on and working.

Port Arthur Independent School District Superintendent Dr. Mark Porterie said the district is not canceling classes Monday, but parents are welcome to pick up their child if they want.

Likewise, PAISD is not sending children home as of Monday evening. The students are safer at school, Porterie said, adding some parents are working and not at home and the district does not want to drop children off if there is no parent there.

“Right now we will keep looking at the weather,” Porterie said.

Porterie is aware of some street flooding but said none of the schools have experienced any flooding issues.

There are a number of barricades in the city due to street flooding. Besides the obvious danger associated with driving around the barricades there also comes the risk at committing a crime.

A person commits a Class B misdemeanor if there is a warning sign or barricade because water is over any portion of a road, street, highway. This comes with a fine no less than $2 or more than $400, according to information from Port Arthur Police Chief Tim Duriso.

Duriso said he has heard of a few vehicles stalled out in the weather and offered this advice: “Turn around, don’t drown.”