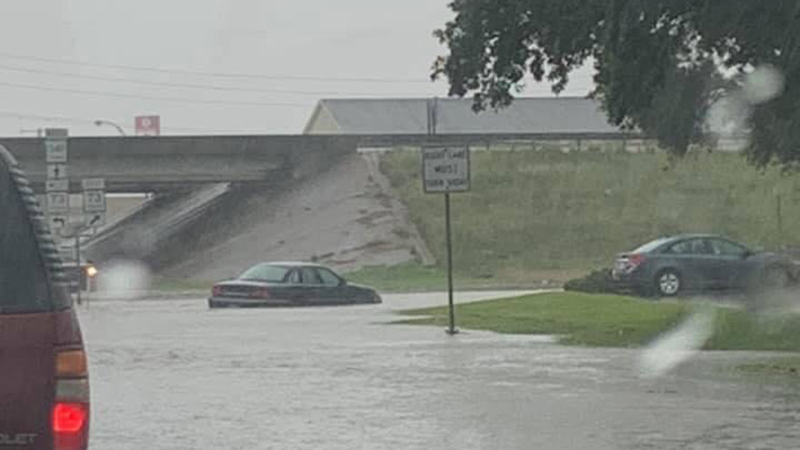 GROVES — Groves City Manager D.E. Sosa was out checking roadways as one of Monday’s storm cells was slowing down.

As of 12:25 p.m. Monday, he noted all of the city’s major thoroughfares were passable.

That’s not to say there wasn’t any earlier minor street flooding, which occurs when several inches of rain is dumped in a relatively short span of time.

Once the heaviest of the rainfall slowed down, Jefferson County Drainage District No. 7 pumps were able to kick into gear. Sosa noted 39th Street was passable where earlier there was some minor street flooding.

Some side streets off the major thoroughfare may still have some water remaining though it is being pumped out.

“There was localized flooding in the usual low areas on Nall, Meriman and Sierra,” Shelton said. “Barricades were put in place and the DD7 ditches were flowing but were at the top. Once those ditch levels drop back down some it will take off some of the excess water.”

In addition, the area has seen a lot of dry weather so some of the rainfall is soaking in to the ground.

The Port Neches Police Department released a statement reminding motorists that driving down flooded roads pushes water into homes, and driving around a barricade on a flooded road is a misdemeanor offense.

On Monday morning, Nederland officials asked motorists to be careful.

“If you are experiencing drainage issues such as street flooding, ditches that are not moving, blocked culverts, etc, please call the Public Works Department at 723-1541,” a city statement read. “Do not drain your backyard by opening the clean out. This will cause the sewer system to experience significant problems.”

Nederland City Manager Chris Duque asked residents to be mindful of the water they are using while washing dishes and washing clothes.

“It’s not like in February when there was a water shortage due to the freeze,” Duque said. “We will see sewer running in high numbers and want to make sure to ask people to minimize wastewater, washing closes, dishes and minimize flushes to allow that system to catch up as well.”

He also asked that people with clean-outs in their yard not to use them for drainage.

Duque was out earlier assessing the situation and noticed a lot of ditches were full until there was a break in the rain and the water began to flow.

There was some street flooding in the city, one of which was Avenue H in front of Doornbos Park that he said held water as bad as it had in the past.

Duque said city crews are out checking ditches making sure the water would flow freely – something they will continue to do.