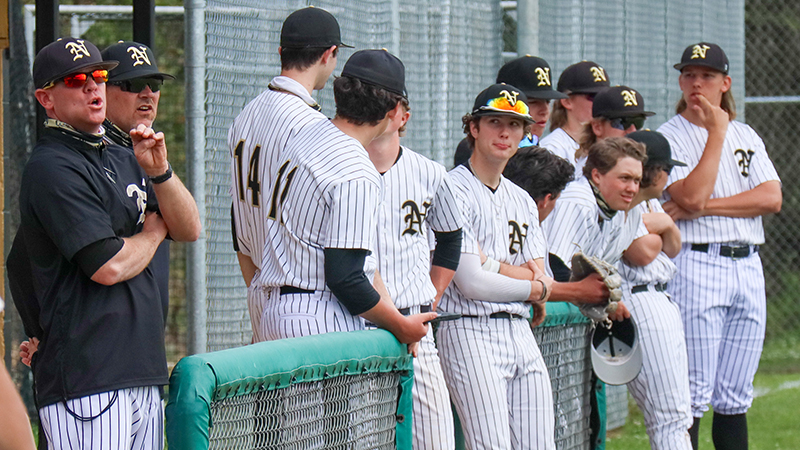 The Nederland Bulldogs cheer on their team. Chris Moore/The News

NEDERLAND — There is no shame in losing to the No. 1-ranked team in the state, Nederland head baseball coach Bryan Spell said.

The Bulldogs fell 2-0 in a series to Friendswood over the weekend, ending Nederland’s season.

“The loss this weekend didn’t change anything,” Spell said. “We enjoyed being around the team. They played extremely well against a very talented team. We competed well. They were just better than us. They are 26-0 for a reason.”

The Bulldogs earned the final playoff spot in District 21-5A.

Senior Corbin Chandler said he was happy the team was able to play a full season after last year’s schedule was cut short due to the coronavirus pandemic.

“One thing that I am going to remember about this year about this team and this season was our bond,” Chandler said. “The bond we had was special. We grew up playing together all of our lives. Our bond was something that no one can break. That is what I will remember.”

Spell said the senior group is some of the finest young men the school has to offer.

“They are high character guys,” Spell said. “They make great grades. That was never something we had to worry about. We have exit interviews with the guys and they thought what we thought, which was the chemistry of this team was its greatest strength.”

Spell said it will be difficult to replace the seniors’ leadership.

“We had quite a few guys on the team that went four rounds deep a few years ago,” Spell said. “Wade Butler was with us for four years. His experience will be greatly missed. Somebody will fill that role. Coaches can only do so much. You have to have leadership that carries the standard. Wade was that guy along with all of the seniors.”

“Sophomore third baseman Noah Kendrick started the last few games for us,” Spell said. “We had our eye on him all season. He had some really quality at-bats for us. He is a guy that came on. Dylan Bell is a freshman. He started the second game against Friendswood. He held them scoreless for two innings. He threw very well for us when he took the mound.”

Starting pitcher Brady Corcoran’s development could be paramount to the Bulldogs’ future success. The freshman threw in some big spots for Nederland.

Spell said playing against a team the caliber of Friendswood could help the younger players learn what it takes to rise to that level of play.

“We discussed it as a team,” he said. “They got to see what highly competitive baseball looks like. The guys that are coming back got a taste of what that is about. They see what it is going to take to match that. That type of experience is invaluable. Hopefully, it will motivate our kids through the summer.”