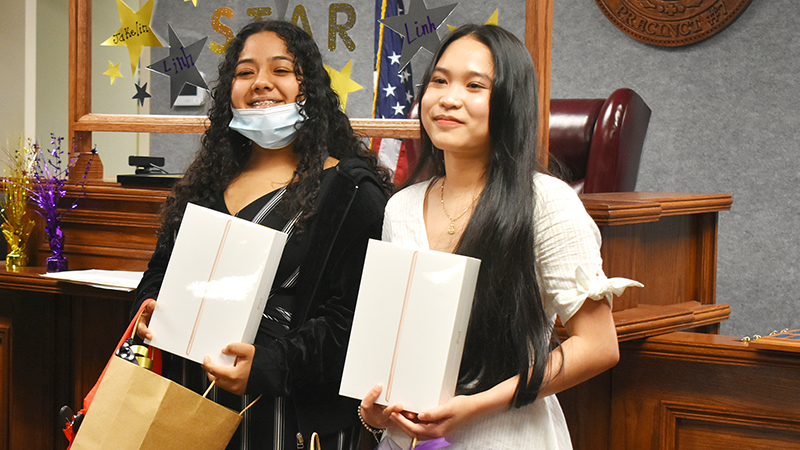 NEDERLAND — Two local high school seniors, one from Port Neches-Groves and one from Nederland, were recognized for their determination and success academically in a special ceremony Wednesday.

Justice of the Peace Pct. 7 Brad Burnett honored Linh Nguyen and Jakelin Manzo with the Shining Star Award, which is given each year to Mid County students that have overcome challenges and taken advantages of opportunities to shine through a major turnaround. Personnel from the schools nominate the recipients.

Linh Nguyen came to the United States from Vietnam in 2018 with her family when she was 15 years old and could only speak a few English words at that time, Jon Deckert, director of student activities at Port Neches-Groves High School, said in Burnett’s crowded courtroom.

“Despite having to overcome the language barrier that many students fail to overcome, Linh has met every challenge, specifically in upper-level math courses,” Deckert said. “As an administrator at PNGHS, I have been shocked at her success in these extremely difficult classes. She is currently a straight A student and exceeds expectations for any senior. In fact, if grades ended today, her lowest final grade would be 98. That is unheard of for a senior student. Furthermore, Linh is fluent in Vietnamese, English and is learning ASL (American Sign Language).” 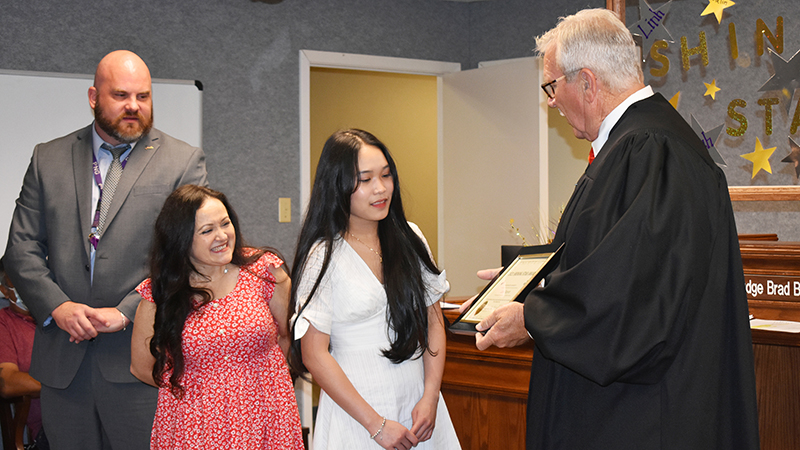 Deckert said when he told Nguyen she would be awarded the Shining Star, her first thought was to ask if she was the only one, adding she didn’t deserve the award.

Nguyen also works all day on Saturdays and Sundays at a Vietnamese market and gives the money to her parents, not as an obligation but because she believes it is the right thing to do.

ESL Specialist Lisa Seaux has worked closely with Nguyen, saying the student attended tutorials and asked for practice items she could do at home.

“In the beginning she could only communicate through Google translate,” Seaux said.

It was soon evident Nguyen was good in math.

Jessica Pardue, math instructor at the high school, was assigned a class in content mastery in which she used this class period to help Nguyen with her algebra as the student was also learning English.

Nguyen plans to attend Lamar University and major in marketing and business.

Celine Do with LU College of Business was also on hand to congratulate Nguyen and provide information on the campus. 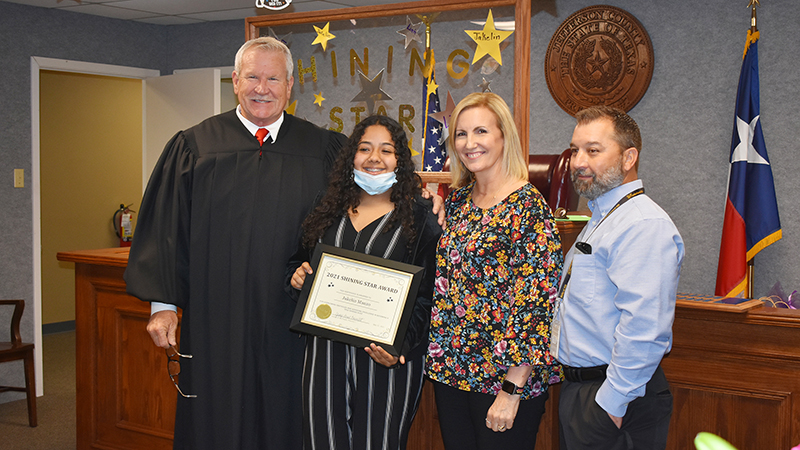 In her freshman year she racked up 18 absences with six being unexcused, 48 tardies, suspension from school for five days, on-campus suspension for 18 days and had to spend 28 days at the alternative campus.

The pattern continued into her sophomore year, with 20 absences, 22 tardies, six days of suspension, 10 days of on-campus suspension and 20 days at the alternative campus.

Last June as Clemmons was preparing for summer school he got a call from Manzo, saying she wanted to sign up for government and economics in addition to the classes she was required to take over the summer.

“I was surprised because government and economics are both advanced credit courses. Jakelin told me that she wanted to take these classes in the summer in an attempt to graduate early,” Clemmons said.

Summer school was scheduled to be completely virtual, so the assistant principal was skeptical Manzo would be successful, but he allowed her to register.

Manzo began the current school year as a virtual student but began attending in-school classes in October. As of Wednesday she had had no discipline problems and is classified as a senior and on track to graduate early.

“Her overall attitude toward school has changed and she always has a smile on her face,” he said. “In my 29 years in education, I have never seen such a drastic improvement in a student.”

Cindi Bordelon, junior counselor at Nederland High School, remarked on Manzo’s past behavior issues and of how the student made the turnaround.

Manzo had to double up in math courses and take senior English in the summer.

“In the beginning I had little hope Jakelin would be able to accomplish this task. This task is hard for any student,” Bordelon said. “We normally see students do this that have much higher GPAs than Jakelin and also get in no trouble and come to school on a constant basis. It is a very big accomplishment.”

Manzo came to school and did the classwork.

“Jakelin is a wonderful example of a person that has so many things working against her. She has fought her way through adversity and will accomplish a goal that many of our true seniors who have been in high school for four years won’t accomplish when May rolls around,” Bordelon said. “On a personal note, you won’t find anyone more kind hearted, respectful and helpful as Jakelin. I am so proud of the fine young woman she has turned out to be.”

Jennifer Thedford, clinical instructor at Lamar University, was on hand to greet Manzo, who plans to pursue a degree in nursing.

Sabrina Faulk, a local nurse practitioner, told Manzo she also struggled as a student and was from a low socio-economic background.

“I, too struggled when I was your age. I was a hard headed turkey,” Faulk said.

Faulk said she worked and paid for the college education a little at a time — first becoming a nurse then a nurse practitioner and now owning her own clinic. She told Manzo to never let anyone tell her she can’t do something. 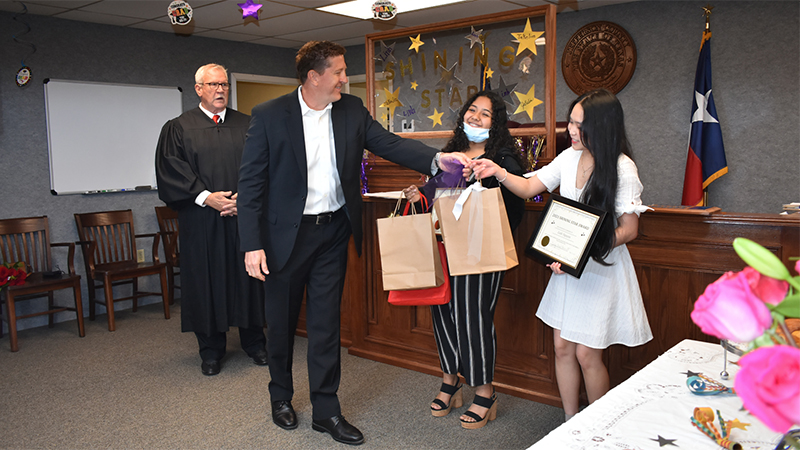 The students and more

Manzo and Nguyen were excited and happy at receiving the awards.

“It’s just a big accomplishment,” Manzo said describing her turnaround, saying she decided to make a change. “I wanted to be a better person from the referrals and all that different stuff. I have A’s and B’s in classes.”

She admits she also has a big role to play because she has siblings who look up to her and she wants to show them they can do this.

Nguyen doubled down on reading books and working on vocabulary while learning English, which lead to her success.

Eric Sullivan of E.Sullivan Advertising and member of the PNGISD school board congratulated Nguyen and Manzo on their accomplishments and presented each with an iPad to use in college.

Linh Nguyen is the daughter of Van Thanh Nguyen and Thi Hien Nguyen.

Jakelin Manzo is the daughter of Gerardo Manzo and Catalina Manzo.