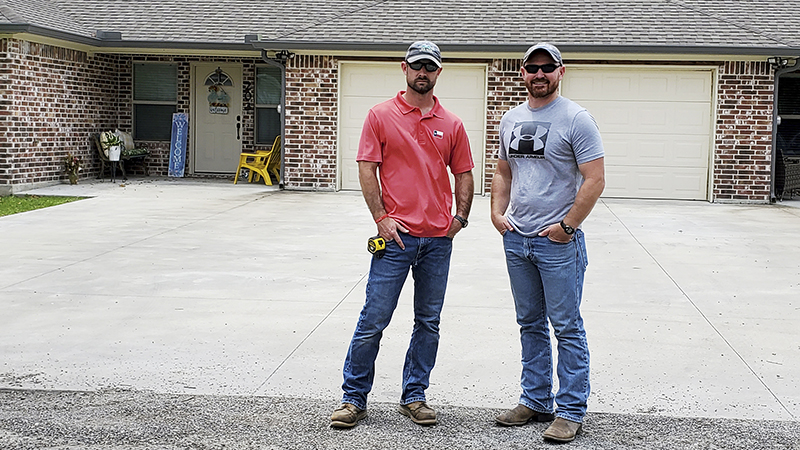 Ross Guidry, left, and Trayce Boudoin stand near a duplex they built on Canal Street in Port Neches. They recently were given the green light to rezone nearby property to build two duplexes. (Mary Meaux/The News)

PORT NECHES — Friends and business partners Trayce Boudoin and Ross Guidry are simultaneously helping the city they grew up in and building homes so others can have the opportunity to experience the city and the school district.

Boudoin and Guidry own B.G. Absolute, a construction company that provides residential and commercial gutter repair and installation, siding and more. They also own B.G. Assets LLC, which is the Real Estate part of their business. Last week the Port Neches City Council approved their request to rezone 207 and 209 and 213 and 215 Canal Street from single family to residential-duplex for the purpose of building two duplexes.

The area where the duplexes are to be constructed are in the Little Abbeville part of the city, which is one of the oldest sections.

The two new projects will be three-bedroom, two-bath dwellings at 1,250 square feet in size per unit, Boudoin said.

They already have a duplex adjacent to the land where the new ones will go. In total they have built five duplexes in Port Neches and Groves and ten homes.

Boudoin said they spend more upfront on the construction while building new, which is easier on the tenant and on them.

“We chose to invest in Port Neches and Groves because we both grew up and graduated from here,” Boudoin said. “It’s our city and we’d like to see it do well.”

Guidry said the duplexes give people an opportunity to explore Port Neches and its schools.

Councilman Robert Arnold knows the men have constructed a number of homes and realizes they take a piece of property and, by adding a home, add to the city.

The Little Abbeville area of the city was chosen by the men to help rebuild the oldest section of the city.

During the recent council meeting, the men told city leaders that, besides investing in the city, they are also investing in their futures and the futures of their children.

“We are building the homes new because in 20 years, the homes will still be relatively new and the kids have an option to do as they want,” Boudoin said.

Guidry and Boudoin expect to break ground on the two duplexes in approximately four months and construct them at the same time. Construction will tentatively take about four months.