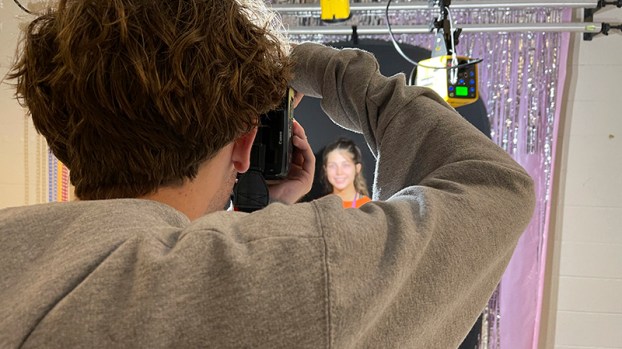 Jason Lovejoy takes a portrait of a classmate in his photography class at PNGHS. (Monique Batson/The News)

It seems so obvious to tell someone to do what they love. We often tell children to find something they enjoy doing and make a career of it.

It is not uncommon for parents to find out their child is good at a particular sport and force them to ride it out, never allowing them to fully develop as their own person.

Professional sports are littered with players who have only seen playing as a career long before anyone gave them money to do it.

Port Neches-Groves soccer star Jason Lovejoy was fourth in the country in assists and is likely the only player in the state’s history to record more than 100 goals and assists in a high school career. He owns several school records and is undoubtedly one of the best athletes to ever suit up for PNG.

He would have likely been able to go anywhere in the country on an athletic scholarship, but he did not want to play anymore after high school. He just wants to kick it. Pun intended.

That’s not to say he doesn’t love the game. He just simply didn’t want to play anymore and that is OK.

His coach, Chad Luttrull, routinely called Lovejoy special for his ability to process and play the game. Because Lovejoy expressed his disinterest in continuing his playing career, it is unknown how many scholarships he received or could have received.

As a parent, I want to applaud Lovejoy’s parents. We constantly want our kids to try new things and we want them to thrive and be good at something. Many live through their children, and their child’s success equals their success. It takes strong, self-aware parenting to allow your child to stop doing something they are good at to pursue something that makes them happy.

Several parents would have seen the potential for an athletic scholarship or a proud father could relish in the idea of his son being a sports star.

Lovejoy will attend Texas State University in the fall to study business and communications. On the outside looking in, his parents seem supportive of his passion for photography and his venture into the communications field.

I have talked to Lovejoy a few times for a couple of stories. He always comes off as level headed and thoughtful.

I admire him for being able to realize what he wants to do and not doing what he thinks would make everyone happy. More importantly, I admire his parents for creating that infrastructure around him, allowing him to feel comfortable making those decisions.

At some point, my two daughters will grow up and be forced to make similar decisions. I can only hope I have done what the Lovejoys have appeared to do for their children.

ASK A COP: Do you have to get out of the car when a police officer asks?

Martin from Port Arthur asks:  The other day my buddy was stopped by the police. I was a passenger in the... read more