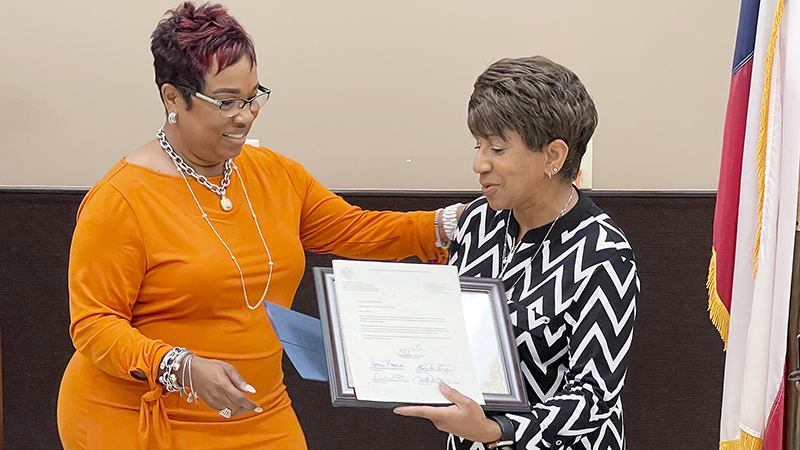 The director of the Port Arthur Health Department knew she and her staff would be honored at the Rotary Club meeting that day. But what she didn’t know was she’d ultimately be recognized with four awards.

Each one was well deserved.

Brad Corley, with Cosmopolitan Lodge No. 172, presented Smith with the Community Builder Award. Russell Buss, who belongs to both organizations, chose her for the annual recognition.

“The Community Builder Award has been designed to enable a Mason lodge to recognize an outstanding non-Mason who has distinguished themselves through the service to a community; local, state or national government; to their church, synagogue or to humanity,” Corley explained to the crowd before calling Smith to the front of the room. “It is indeed my honor and privilege to represent Cosmopolitan Lodge to make this presentation to you today.” 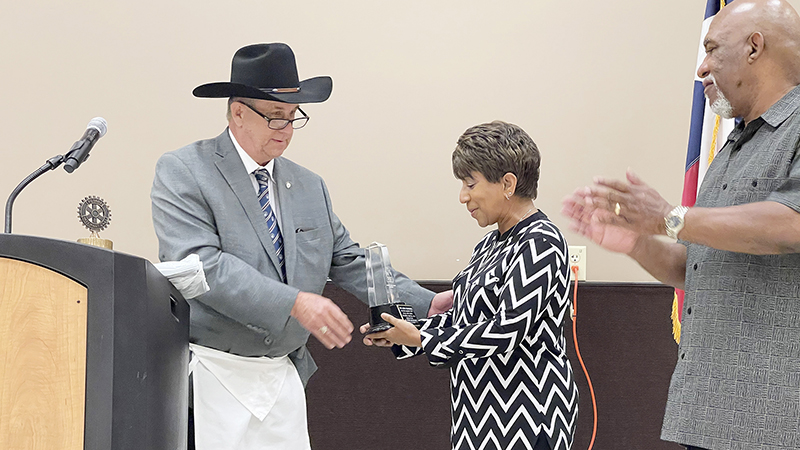 But in addition to the glass plaque, the Lodge awarded her with a framed certificate.

She was given a proclamation by the Jefferson County Commissioners thanking her and her staff.

And Mayor Pro Tem Charlotte Moses also presented her with a proclamation from the City of Port Arthur, whose council members all attended the event in support.

“Judith is always ready for the task,” Moses said as she read the document, “and we are proud to present her with this proclamation, as she is more than worthy of this honor.”

Dr. Johnny Brown, president of the Rotary Club, remarked on the special occasion.

“Judith Smith believes from the heart, quietly and effectively. And I’m just so very proud of you,” Brown said.

Smith, humble as always, spoke not of herself but of her staff — calling each by name, whether or not they were in attendance.

“The first thing I have to say is to God be the glory,” Smith told the crowd after receiving the many awards. “I’ve been at the Port Arthur Health Department for many years; and every now and then there’s something that comes in your path that you have no idea what to do with or how to do it. And so every single thing that I petitioned and asked God for, he gave it to me. And not just to me, but to my staff.”

Smith graduated from Lamar University in 1979 and has worked as a registered nurse for 41 years. She began her time with the Port Arthur Health Department in 1983, working as a nurse in the immunization clinic. In 2016, she also earned a doctorate in theology.

In 2013, she was named director of the health department that serves residents in Port Arthur, Nederland, Port Neches and Groves.

In March 2020, Smith joined other leaders to help create and run a mass testing site at Jack Brooks Regional Airport, opening vaccinations up to residents soon after through a hub at the Bob Bowers Civic Center. That hub is still in operation, but has since moved to the Texas Artists Museum building next to the Civic Center.

Smith and her husband have two children and one grandchild.

She is also a Rotarian.