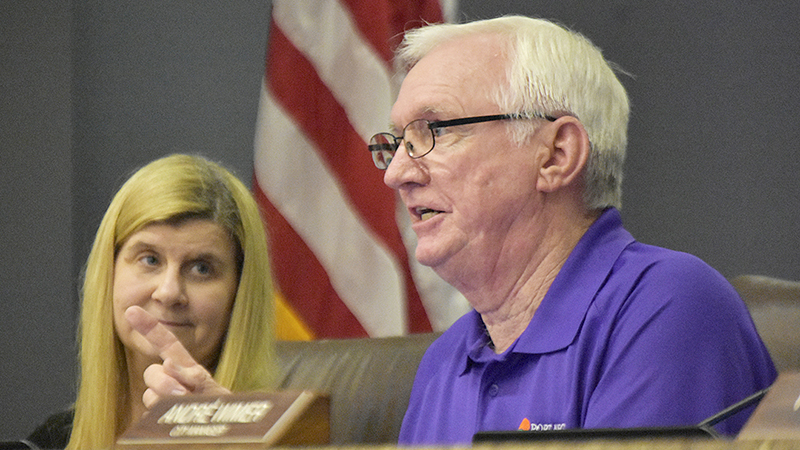 PORT NECHES — It was the development of Port Neches that brought Mayor Glenn Johnson to city government in 1996. And as it booms in a landlocked town, he plans to see it through.

Johnson, who has served 17 years as mayor, will run for re-election in November.

“Port Neches is lucky,” Johnson said. “The backbone of our city is the staff. Those that work at city hall, the police department, fire department, public works department. They are just tremendous and they make the job easy because they really take care of business. It’s really been an honor to serve as mayor of Port Neches. It really has.”

In 1994, two years before he would run for city council for the first time, Johnson’s wife was a member of the Port Neches Pride League, which was an organization of women dedicated to the beautification of the city.

“She comes home one night and says, ‘We want you to come to the next meeting because we want to build a playground at the park and we want to get the husbands involved.’”

Johnson did as his wife wished and was named general coordinator for the project that would ultimately become Tugboat Island.

“Two years later there was going to be a vacancy on the council. Someone approached me and said, ‘You ought to run,’” Johnson recalls.

While he wasn’t sure how he would balance campaigning while building a playground, he ran. And that would be the only time he had to win an election. Johnson hasn’t faced an opponent since.

In 2002, he was appointed to fill the unexpired term left by the death of then-mayor Frances Monk. The following year, he ran for his first 3-year term.

“When I first became mayor, we were landlocked,” Johnson said. “So either you could continue to do nothing and fade away, or say what assets do we have? We realized the city had crazy zoning, so we went through the process of rezoning. The riverfront had an abandoned refinery on the river. We decided we would clean it up and try to develop it in some way. Here 14-15 years later…”

Riverfront development had been a city discussion for more than a decade. But it would be in 2014, with the opening of Neches River Wheelhouse, when things would begin to take shape.

“I don’t have to tell you how successful that’s been,” the mayor said. “Their first year in business, they paid us more in sales tax and property tax than the property was worth.”

Later, Iguana Joe’s announced its intent to open nearby, with construction expected to start this summer. Two more restaurants would announce their intent to join the riverfront. The area that formerly housed the old refinery is now under construction to be a 100-home subdivision.

A sidewalk and decorative lighting were added to the area to allow for riverfront walks day or night.

“I’m so pleased with the progress Port Neches has made over the years,” Johnson said. The citizens are tremendous. RiverFest speaks for itself — record number crowds. And you can’t drive 30 miles an hour downtown anymore. The Chamber’s there, Neches Brewing Company, The Avenue Café, plus all the shops that have opened down there.”

Johnson and his family moved to Port Neches in 1981, and it didn’t take long for them to fall in love with the area.

“The first week we moved out here, the oldest boy who was in first grade, was singing ‘Cherokee,’” he said. “My two boys graduated from PNG, now I’ve got a grandson and granddaughter that go to PNG. We have a closet full of purple shirts and are just real proud of the school district.”

While the city and schools have separate governing boards, Johnson said their great working relationship is another perk for the area.

“You can’t beat PNGISD,” he said. “That’s one of the jewels in our crown.”