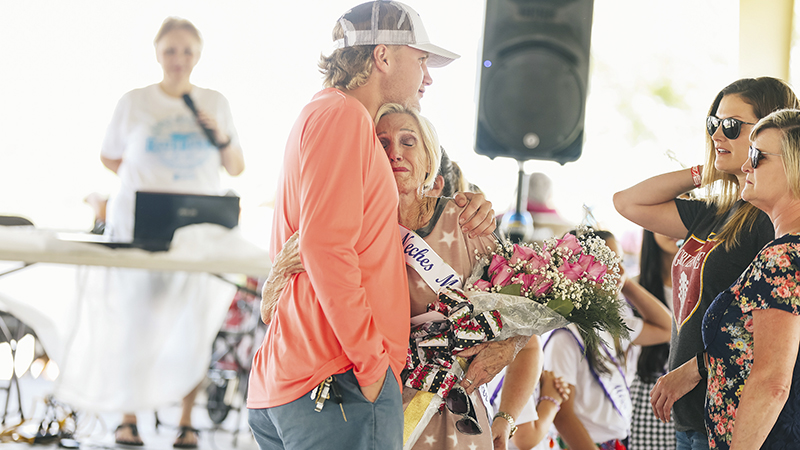 Port Neches Mother of the Year Mae Terro gets a hug from grandson Jesse Bartley during the ceremony on Sunday. (Courtesy of Leo Weeks Photographers)

PORT NECHES — Mae Terro wasn’t much in the mood to go to RiverFest on Sunday.

A busy senior citizen, Terro continues to work and attend family functions, but she tried to opt out of the event. One of her daughters convinced her to go.

Little by little the family inched her toward the pavilion, where she saw some of the Pet Show and the introduction of the pageant royalty.

Then Port Neches Chamber of Commerce Executive Director Debbie Plaia began to speak about last year’s Mother of the Year, Kelly Plante, who didn’t get to see a festival due to COVID-19. 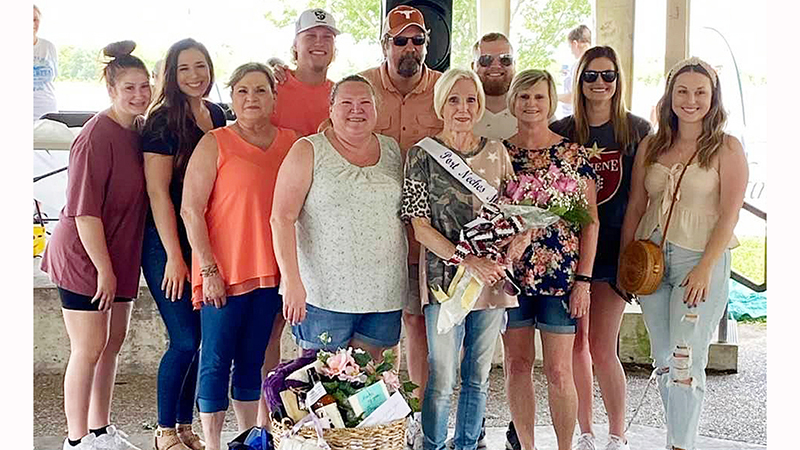 “She said something about 2021 and something about my name. She was looking at me, and I thought she said Mae Terro. It didn’t dawn on me the words coming out of her mouth. Then it dawned on me,” Terro said of the moments leading up to her being named the 2021 Port Neches Mother of the Year.

“It thrilled me to tears. It was so exciting. For your children to think that much of you to nominate you for something like that. I think it means I did something right along the way.”

Terro and late husband Lee were staples at Port Neches-Groves football games ,where they were ticket holders for more than 50 years.

“Many, many trips were planned around PNG games and various functions, where all three of their children attended school and graduated,” Bartley said in the letter. “Mae has five grandchildren and diligently attends most of their extracurricular activities, no matter where they are held.”

Being named Port Neches Mother of the Year was bittersweet, Terro said.

“It brought back good memories, things that I’ve enjoyed, the organizations that I have worked with and been a member of,” she said. “Then it brought back the death (of my husband) and all of the happy years we had. It made me feel my daughters appreciate everything we had done for them through the years, not just me, but my husband also.”

Terro is all about family and recalled when she gave up going to her beloved PNG football games to attend school events in Lumberton, where her grandchildren attended; one grandson in football, another grandson in band and a granddaughter in the Lumberton High School Raiderettes drill team.