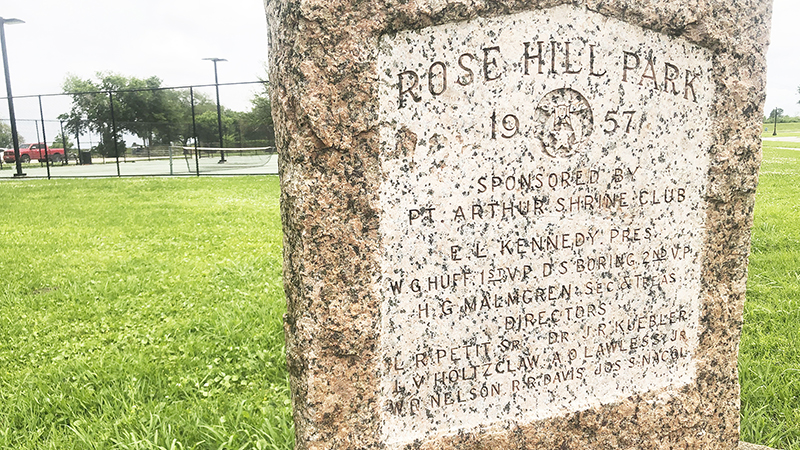 A plaque at Rose Hill Park on Woodworth Boulevard details its dedication in 1957. (Monique Batson/The News)

The ballot item called for changes to two city parks and the Recreation and Senior Citizens Center, paid for by the reallocation of $3 million in sales tax revenue split into $1 million each year for three years.

“The voters approved the actual proposition; so now we will look into actually securing renderings, having meetings and finding out exactly what citizens may want in those places,” said Director of Parks and Recreation Chandra Alpough. “We will be (getting) information and feedback from citizens.”

A plan for Adams Park, Rose Hill Park and the recreation center was presented to the City Council in mid-April. However, Alpough said, there are still some uncertainties as far as the final plan and the timeline of when construction will start.

“We won’t have access to the funds until Oct. 1,” she said. “We plan to start vigorously in getting this process done. A lot of things come in to play.”

The plan brought before the council included:

“We did a structural analysis on the recreation center, and it’s still structurally sound,” Alpough said of the facility built in the 1960s.

The reason the department singled-out these particular locations was due to location.

“Rose Hill Park is one of the gateways to the downtown area,” the director said of the park located near Memorial High School. “It has a lot of things near it. Adams Park already has so many elements. It’s in a part of town where everything is accessible — restaurants are coming up and hotels. It’s an ideal place to have tournaments.”

Mayor Thurman Bartie joined her in that sentiment.

“The enhancements will do something for us economically,” he said. “We’ll be able to host some of those (sports) event. We should be at least accommodating to the attendees and the teams.”

Bartie was also excited about the renovations to the downtown park, which has become a hub of development.

“I think we have a lot of traffic in that area,” he said, “even further enhancing that park does more for our city. We have to begin somewhere, and I extend gratitude to the voters for allowing that.”

While the two parks and rec center specifically were named in the proposition, other parks will get upgrades.

“We’re not just focusing on those three,” Alpough said.