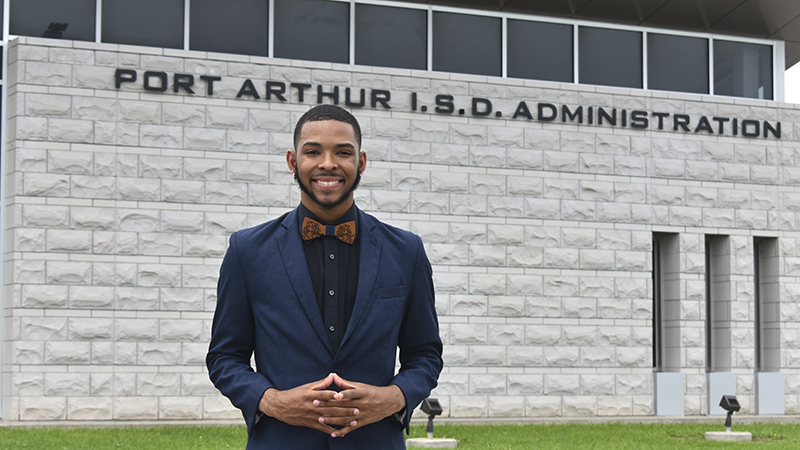 Taylor Getwood, who will be sworn in as trustee in Port Arthur Independent School District next week, made history as the youngest person elected to the position. (Mary Meaux/The News)

Taylor Getwood will make history next week when he raises his hand and swears an oath to become the youngest trustee in Port Arthur Independent School District history.

Getwood, who turns 19 in July, doesn’t feel like he’s made history because of his age. He’s more focused on the fact this — being on school board — is something he feels he needs to do.

Kimberly Wycoff brought in 17.51 percent of the votes, incumbent Lloyd Marie Johnson had 11:45 percent and Yadira Cardenas had 9.92 percent.

The top three vote getters earned a spot on the school board for a full three-year term.

There were two candidates contenting for the one year unexpired term left vacant by the Rev. Donald Frank; Dianne Brown who brought in 77.11 percent of the votes and earned the seat and Joe Escobdeo with 22.89 percent.

Brandon Bartie was in his late 20s when he ran for school board the first time around. He is now on his third term.

“We often hear our elders say we need the younger generation to step up and be the future of the city,” Bartie said.

And that is being done. Bartie’s friend and classmate Christopher Bates is also a history-making individual. When he took office at the age of 27 as the Precinct 2 Jefferson County Constable in the November 2012 election, he became the second youngest constable in the history of Texas, the youngest elected to office in the county and the first African American constable for Precinct 2.

Bates shares Bartie’s thoughts of hearing the older generation say its time for the younger generation to come forward.

“That’s one of the things I heard in talking to some of our voters who are older and more wise. Basically, for some time now, they have wanted to see younger individuals run for office,” Bates said. “They tell me ‘we’ve been here a while and now is the time for you younger people to step up and hold these roles.’”

He’s glad to see that this has encouraged others to take the leadership roles, especially with the blessing and encouragement of the older generation.

“I am definitely proud to be part of that movement of more younger individuals to have leadership roles,” Bates said.

Bartie is part of the first graduating class of Memorial High School and has a number of classmates that took on leadership roles at an early age.

Bartie spoke with Getwood on Election Night, saying there is plenty of work to be done and it’s time to get to it.

“We have a lot of veterans on the school board,” Bartie said. “I told him to sit back and relax, learn all he can learn, make good solid decisions when it comes, not just to the students, but to finance and all that we encounter with school board.”

The electoral win has begun to sink in.

“To me it feels like an obligation. I don’t feel like ‘wow, I made history.’ It’s something I need to do,” he said calling on his experiences as a recent graduate of the school district as a way to tie in the old and new. “I would encourage anyone interested to do this (leadership role) and hopefully my story encourages others.”

He believes the community was ready for a change but also understands why there aren’t a lot of people putting their names in the hat.

“You’re nervous and scared and don’t know how any of this will turn out,” he said.

Getwood is a student at Texas Southern University, which he attends virtually. He is majoring in communications with a minor in political science and said he would graduate in approximately two semesters.

As a recent high school graduate, he believes he knows how teachers and students feel and wants to be a fresh face on the board.

Though this is the first political office he’s held, he has served on the superintendent’s advisory board at Memorial High School, has worked with city officials and worked alongside the local NAACP chapter. He was a CEO/teen mentor for the Port Arthur MLK youth organization and volunteered with other organizations.