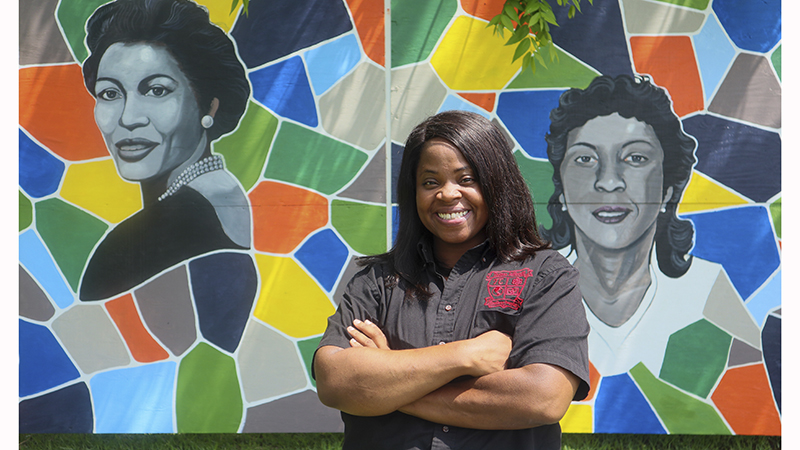 Aries Milo stands in front of two of the murals outside of her son’s snack stand in West Port Arthur. (Chris Moore/The News)

A Port Arthur resident is trying to help beautify the area around her son’s small business and bring attention to local figures.

Aries Milo, who is an eighth grade teacher, wanted to find ways to teach children and adults about local historical figures. Milo began Karson’s Snack Shack at 730 West 10th St. for her son a few years back.

“My kids said they don’t know these people,” she said. “I thought that is a problem. I feel like if they know who these people are and know the work they have done, they will have more pride in the city they come from.”

Milo, who has a master’s degree in urban development from Texas State, said research shows the positive impact of having art in the city.

“One of my goals was for me to come back home and do what I can and do my part to help revitalize the city,” she said. “I fell in love with the use of murals, the beauty it brings and the history it brings to communities. I feel like sports are a thing in PA. Everyone knows the major players. They know who goes far, but we never remember those who pave the way for those athletes.”

“You put these important people on these murals and it builds pride,” she said. “Crime rates go down and this sense of community and appreciation comes together. We just want to be able to appreciate the people that came before us.” 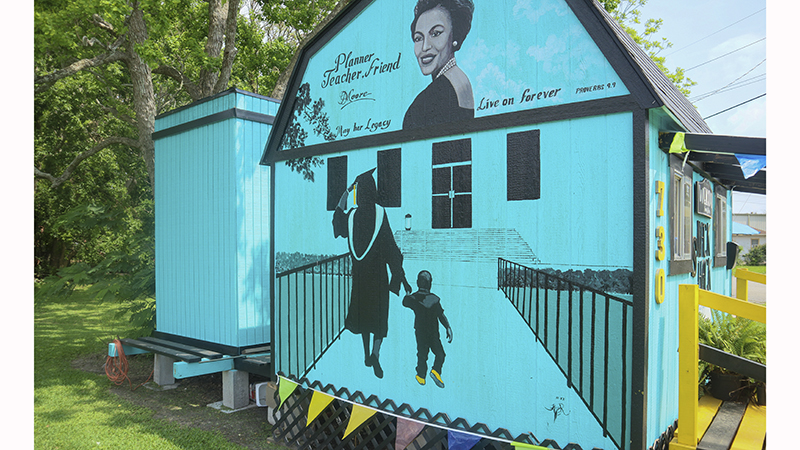 Aries Milo had a mural of Inell Moore put on the side of her son’s small business, Karson’s Snack Shack. (Chris Moore/The News)

Two murals are already up at the location, and Milo started a GoFundMe account to raise $20,000 to get 13 more added. As of Monday evening, people had donated $195. Search “Aries Milo” at gofundme.com.

The first two murals are of former teachers Linda Lucas and Inell Moore, who also spent decades on the city’s planning and zoning board.

“I lived in Houston for six years,” Milo said. “I loved it and hated it at the same time. I got into an argument with a lady about a month ago because I told her about the project and she was like, ‘Who is going to give you money for it? Y’all don’t have money out there.’ This is me really trying to help people see that it takes us as a community to come together to get things like this built. I really push the importance of support to make things grow, like my son’s snack stand. It takes us to make sure the city keeps growing.”

Port Arthur Mayor Thurman Bartie said the effort is a noble gesture that has a lasting impact, because it is historic and teaches.

“If (young people) are able to see it while they are there, I hope the subliminal messaging works and it gets passed on,” he said.

Milo would like to have the murals completed by July.

“My painter is ready to go,” she said. “As soon as I get a payment from an organization or the community, we build the canvas within about 24 hours and then he comes out there and in about eight hours, it is done. If we can get it done by July, that would be perfect.”