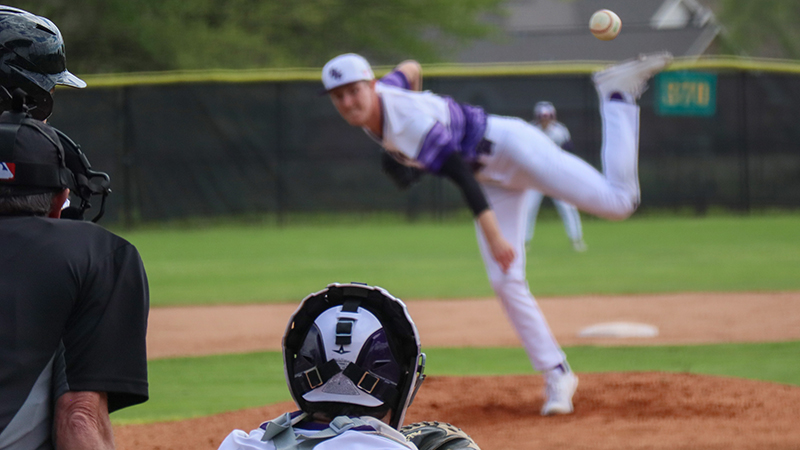 Port Neches-Groves pitcher Tristan Abshire delivers a pitch to the plate during a game earlier this season. (Chris Moore/The News)

PORT NECHES — The Port Neches-Groves baseball team snagged a share of the District 21-5A division title this past weekend with a sweep over Galena Park.

PNG shares the title with Barbers Hill, but will be the No. 1 seed after sweeping the Eagles last month.

The Indians will play La Porte with the series starting Friday on the road. Games 2 and 3 (if necessary) will be played in Port Neches Saturday.

“This district is very competitive,” PNG head coach Scott Carter said. “Our kids really bought in. They played a rough, gauntlet schedule. I am really proud of the way they competed and what they’ve done.”

“We had a very tough preseason schedule,” Bost said. “We played some really high-ranked teams. We really faced some great pitching and hitting from the teams we played. We played a lot of 6A schools, which prepared us for the playoffs.”

The Indians closed the season with a sweep over Galena Park, winning 7-6 and 9-1.

“It feels amazing to win district, especially with how slow our season started out,” he said.

The Indians have won five straight heading into this week’s series.

“It is really important to be playing your best ball at the end of the season,” Carter said. “You want to continue to improve all year long. It is not about how you start, it is about how you finish.”

The amount the team has grown is evident by how much better the Indians are than when they last played in La Porte this year.

“We went to their tournament earlier in the year and we didn’t win a game,” Carter said. “We were 0-5 after their tournament. We are hoping to have a better outcome this week. They have a really good ball club and are well coached. They are in the playoffs every year.”

“I didn’t even know until my assistant coach told me,” he said. “Coach Abshire does a great job keeping up with the history of what is going on here at Port Neches. He told me after the game. It shocked me. It is a great feeling. It is a credit to the great kids, our administrative staff and coaches. It takes a village to make this happen. You just have to give credit to everybody involved.”

First pitch for Friday’s game is set for 7 p.m. in La Porte. Saturday’s game will start at 2 p.m. and Game 3 will start 30 minutes after Game 2 if needed.