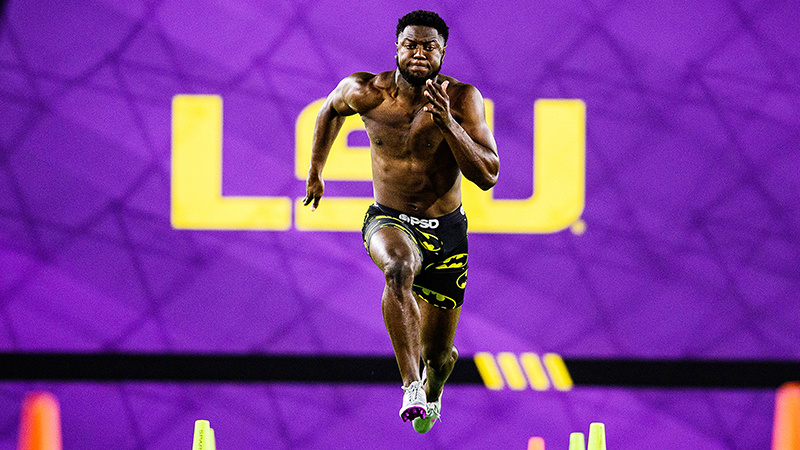 Kary Vincent Jr. looks like he is lifting off the ground during his sprint this week at the LSU Pro Day in front of NFL coaches, executives and scouts. Photo by: Gus Stark

Vincent was the ninth selection in the seventh round.

He was part of LSU’s national championship team in 2019.

The team selected the LSU cornerback with the 237th-overall pick.

“First off, it’s an honor to be drafted,” Vincent said in a news release Saturday. “I know a lot of guys don’t make it here. I know a lot of people didn’t think I would make it this far. Going this late is just a really humbling experience and I’m just so hungry. I’m glad you guys have given me this opportunity. I’m ready to get there and work.”

“I think he is going to fit right in,” Harrison said.

Vincent, a two-year starter at LSU, played in the slot as a nickel cornerback for the Tigers. That skill set could be a valuable one as he transitions to the next level.

“We’ll definitely give him an opportunity to learn the nickel and dime position,” Head Coach Vic Fangio said Saturday after the draft. “He’s had experience doing that at LSU and obviously played some outside corner, also. I don’t see him going back to safety at this point, but if you can play the nickel position inside, it’s a feather in your cap and helps you make a team.”

Vincent’s skillset also includes tremendous speed. At LSU, Vincent also ran track as part of the Tigers’ 4×100 meter relay team, which clocked the 14th-fastest time in NCAA history in 2019. During his pro day in March, Vincent ran two 40-yard dashes that each came in under 4.4 seconds.

Vincent was a member of the 2017 4×100 relay team that recorded the second fastest time by a high school ever in the country.

Vincent recorded four interceptions and 12 passes defensed during his final season on the field for LSU. He opted out ahead of the 2020 season.

“The reason I opted out this season was due to the uncertainty of the disease,” Vincent said. “At that time, I honestly didn’t think we were going to have a season. I got it myself and I contracted symptoms twice. I got tested twice, and they didn’t know what was going on. That was the reason for me not playing this year.”

He finished his career with 87 tackles, 3.5 tackles for loss, one sack, 21 passes defensed and six interceptions in 39 games.

The Broncos also used their first-round pick on a cornerback, selecting Pat Surtain II, but General Manager George Paton said they couldn’t pass on him as he fell down the board.

“Really talented, and he was just — it wasn’t that we needed a corner, but he was sticking out like a sore thumb,” Paton said Saturday. “This kid is really talented, and he was falling. He’s fast; he’s a track guy. Had some injuries, so he was falling a little bit, but he can play nickel, he’s played safety. … I think he’s a good kid, but if we can get him right in health and to be a pro, I think he can be a really good player.”